The West Jessamine Colts completed the season sweep of the Mercer County Titans on Tuesday, Sept. 18, by a final score of 3-2.

Marcus Lewis scored both goals for the Titans. A.J. Kinnell, Lucas Labrillazo and Saylor Gilliland scored one goal each for the Colts.

Despite narrowly losing by one goal, the Titans lost by five goals to the Colts just over a week ago, so this match was a step up for the Titans.

“The first game, we beat ourselves mentally. We came out flat,” said Head Coach Doug McClain. “In this game, we knew they were going to come at us strong the first few minutes so we just kind of sat back and took the punch. Mentally, we were much better this game. We just have to learn to win and put games away. But I was pleased with our effort tonight. We had chances, we just couldn’t convert.”

The Titans are still missing one of their senior leaders in Angelo Ontiveros, but hope to get him back soon.

“We’re still missing Angelo (Ontiveros), who is a leader out there. Hopefully we get him back sooner rather than later,” said McClain.

Lewis scored the first goal of the match in the 16th minute after a battle inside the penalty box.

Kinnell tied the game at one in the 23rd minute. Mercer goalkeeper Chris Day left the goal to approach the ball, but Kinnell made a heads up play and connected on a bending strike to the back of the net.

Labrillazo put West Jessamine ahead in the 46th minute from outside the top of the box. Seven minutes later, Lewis was fouled inside the box. He was able to convert on a penalty kick to tie the game at two.

The last 25 minutes were a battle. Unfortunately for Mercer County, the Colts were able to give the last blow.

Gilliland scored the go-ahead goal with 22 minutes left in the match. The Titans had a couple chances in the last 10 minutes of the match, but weren’t able to convert.

The Titans will be back on the field Thursday, Sept. 20, when they host Southwestern at 7:30 p.m. 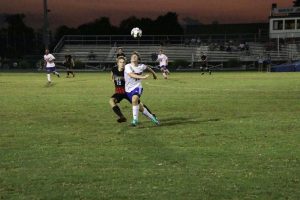 Sammy Berger (right) fights for the ball in the air against West Jessamine on Tuesday, Sept. 18. 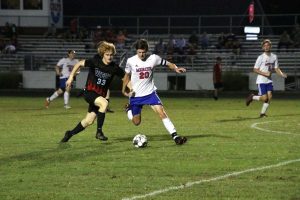 Kola Raskin (20) is in a battle at midfield against West Jessamine. 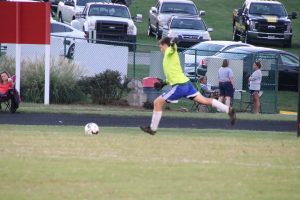