Four turnovers plagued the Mercer County Titans (1-3) against the Lincoln County Patriots, who won the game by a final score of 28-14 on Friday, Sept. 14.

Darius Napier led the Patriots with 81 rushing yards on 15 carries, with three touchdowns.

Junior Malachi Yulee led the Titans with 196 rushing yards on 12 carries, scoring the only two touchdowns of the game for the Titans. Yulee also had 10 tackles, including one sack on defense. Senior lineman Sam Warren led Mercer County with 13 tackles.

Buchanan kept it simple when talking about the four fumbles lost.

“Somewhat mystical, complex issues have a simple answer. We have to get better,” he said. “We continue to practice. We have stressed turnovers here since day one. We have even adjusted parts of our offense to decrease the chances of turnovers. We will keep working.”

Lincoln County quarterback Bryson Yaden went 11-for-15 passing with one interception. Yaden also had an interception and fumble recovery on the defensive side of the football to lead the Patriots.

Zack Hazlett returned the opening kickoff of the second half for a touchdown to round out Lincoln’s scoring.

On the very first offensive play of the game, Yulee ran it 60 yards for a touchdown to put Mercer County up 7-0 after sophomore Christina McClain’s extra point.

Lincoln County answered right back, driving down the field until Napier’s 24-yard scoring run to tie the game at seven.

Mercer County’s next drive ended in a fumble recovered by Yaden, giving the Patriots great field position at the Titan 43-yard line.

The Titans needed an answer, but the drive ended on a fumble again. Luckily, the Patriots missed a field goal on the drive and no damage was done.

After a big 50-yard reception by Allen from Drakeford, the Titans were set up first and 10 at the Patriot 19-yard line.

Yulee ended the drive with his second rushing touchdown of the game, this one from six yards outs to tie the game at 14 going into the half.

“He (Malachi) and our offensive line have really improved,” said Buchanan. “Kaelin (Drakeford) does a great job for us calling our run game. All of that together has really helped us.”

The Patriots received the opening second-half kickoff and quickly got on the board. Hazlett’s took it back 60 yards for the score and pushed Lincoln County’s lead to 21-14.

The Titans would come up empty on their next possession, which ended in a punt.

After forcing a punt on Lincoln County’s next drive, the Titans fumbled again, giving the ball right back to the Patriots at their 40-yard line.

Napier ended the drive with a five yard rushing touchdown, giving the Patriots a 28-14 lead with 10:47 to go in the game.

The Titans were forced to punt on their next possession with eight minutes to go, but senior Jon Jon Logue got the ball back with an interception. The Titans had the ball at their 39-yard line, down 14, with six minutes to play.

Unfortunately, the turnover bug hit them again, fumbling the ball back to the Patriots.

Lincoln County punted after recovering the fumble, but there was little time left on the clock to put up 14 points.

The Titans will be back on the field Friday, Sept. 21, when they host the Marion County Knights at 7:30 p.m., for a big district matchup.

The following two games are also district games against East and West Jessamine, so the Titans have their work cut out for them.

“All these games coming up are big,” said Buchanan. “We are 0-0 right now. What matters is what happens next.” 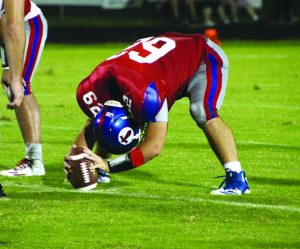 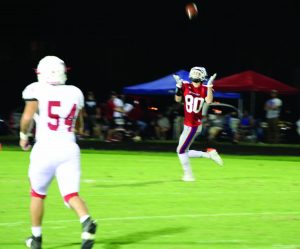 Sophomore Trevor Allen (80) makes a reception against Lincoln County for 50 yards on Friday, Sept. 14. The Patriots defeated the Titans 28-14. 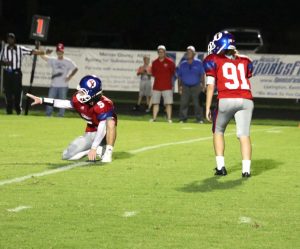