It’s at that point in soccer season where every game down the stretch becomes crucial, especially district games.

The Mercer County Titans (4-8-2) earned a regular season sweep of the East Jessamine Jaguars (3-5) on Thursday, Sept. 13, defeating them by a final score of 2-1.

Senior Andrew Turpin scored both goals against the Jags, just two weeks removed from scoring a hat trick against East at their field. He is now tied with senior Marcus Lewis for the team lead in goals with eight.

“Turp is creative and creates on his own. He’s really good playing off of others,” said Head Coach Doug McClain. “He’s got a dangerous left foot, we just need to get him to use his right foot a little more. A lot of times, he passes up some right-footed shots. He does a great job for us.”

After a scoreless 32 minutes, Turpin was able to score in the 33rd minute and put the Titans ahead at halftime.

Ten minutes into the second half, Turpin scored again on a strong strike from the top of the box.

The Titans held a 2-0 lead, but East didn’t back down.

Tony Gerling scored after a nice cross with nine minutes to play, but East wasn’t able to get past Mercer goalie  Chris Day in the final five minutes.

The Titans earned their second district win of the season, both against the Jaguars.

They have been battling injuries in the last few weeks to key players, one of them being senior Angelo Ontiveros.

“We are missing our leader in Angelo and hopefully we get him back soon. It’s a huge loss for us,” said McClain. “He’s just a leader on and off the field. It’s been great seeing how our team can go without him, but we need his leadership on the field.”

Ontiveros shouldn’t be out much longer, and the Titans will be glad to have him back.

Mercer County will be back on the field Tueday, Sept. 25, when they host Newport Central Catholic at 7:30 p.m. 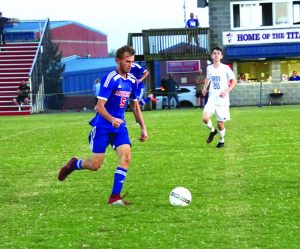 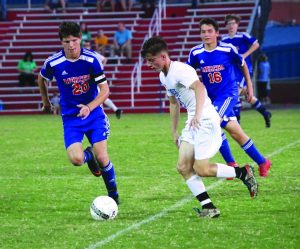 Senior Kola Raskin (20) gets back on defense against East Jessamine on Thursday, Sept. 13. The Titans defeated the Jags 2-1 for a regular season sweep. 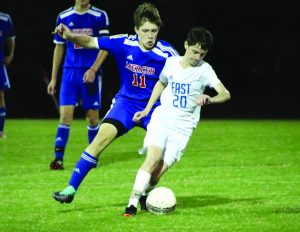 Sophomore Sammy Berger (11) fights with East Jessamine’s Landon Roberts (20) for possession of the ball at midfield in Mercer’s 2-1 victory over the Jaguars on Thursday, Sept. 13.