The Mercer County Lady Titans (7-2) were handed their first 46th district loss of the season to the back-to-back defending state champions, the West Jessamine Colts (7-2-1), by a final score of 4-1 on Wednesday, Sept. 12.

Freshman Maddie Angel scored the only goal for the Lady Titans in the 65th minute, but the Colts had already held a comfortable lead by that point.

“After the game I just told them to keep their heads up. They know what the competition is at this point. We know their style and we know how they play,” said Head Coach Josh Culver. “We just have to do a better job of anticipating and moving to space. Their offense is about finding space. They (West) take whatever space is available whenever you give it to them. That’s what our girls are trying to pick up on, but they haven’t bought into it fully yet.”

The first 35 minutes of the game were scoreless until freshman Suly Smith’s goal kick to the center of the attacking third for West was picked up by Bish, who easily put the ball past freshman Chase Flach to put West ahead with just five minutes left in the first half.

Unfortunately for the Lady Titans, they couldn’t keep it at a 1-0 deficit heading into halftime.

Bish was able to get loose and score again. She took the space that was available and scored her second goal of the match just minutes after her first one. It was a crushing way to end the first half for the Lady Titans after playing a near flawless game defensively in the first 35 minutes.

West was able to add on to their lead in the 51st minute when Saraya Young was able to score to put West ahead 3-0.

Angel scored on a beautiful shot from outside the top of the box to give the Lady Titans a late goal with 15 minutes left to play.

“Soccer is not about just certain positions. Formations are a guideline, we’ve talked about that. You’ve got to take what the defense gives you, find gaps and I think West just does a phenomenal job of that,” said Culver. “It’s constant movement. They don’t slow down and they keep their attack on heavy. We’re going to go back to film, we’re going to watch it and learn from it.”

The Lady Titans host West Jessamine one more time on Monday, Oct. 1, in the last game of the regular season.

They will be back on the pitch Wednesday, Sept. 26, when they host East Jessamine at 7:30 p.m. 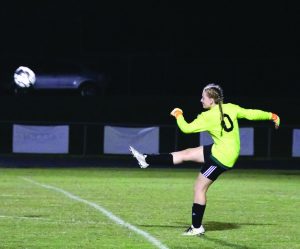 Mercer goalkeeper Chase Flach shows off her leg power on a goal kick against West Jessamine on Wednesday, Sept. 12. The Colts defeated the Lady Titans 4-1. 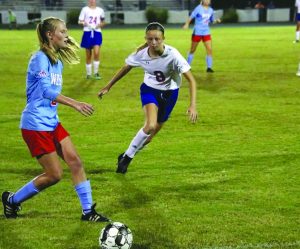 Sophomore Abby Dean (right) chases down West Jessamine’s Hannah Carper (left) down the sideline during Mercer’s 4-1 loss to the Colts on Wednesday, Sept. 12. 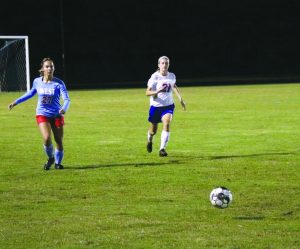