“The first set was pretty exciting,” said Head Coach Rick Stewart. “I enjoyed us playing as a team and the enthusiasm. We just started making fundamental errors. After losing the first set, we had to stay together mentally.”

Burgin had chances in the first set, taking a 23-22 lead, but the Lady Pirates stormed back and won the final three points to take the first set.

Despite the straight set loss, Stewart said the first set was very promising and his team can build off of that.

“A lot of it just boils down to mental mistake,” said Stewart. “We’re going to go through things like that because we have a really young team. At some point, we have to get to where we want to be.”

One of Burgin’s strongest players, sophomore Laura Burke, left the game due to injury in the middle of the first set.

“We had to move some people around due to the loss of Laura (Burke),” said Stewart. “It hurt losing her. She’s one of our best players.”

Berea took the final two sets by a score of 25-8 in each set.

Burgin will be back on the court Monday, Sept. 24, when they travel to McCreary Central to take on the Raiders at 6 p.m. 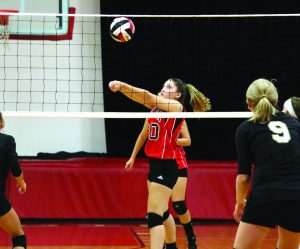 Burgin junior Julia Holton sets up a teammate against Berea on Monday, Sept. 17. The Lady Pirates defeated the Lady Bulldogs in straight sets. 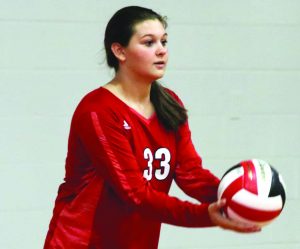 Freshman Brynn Simpson is focused before a serve against Berea on Monday, Sept. 17. 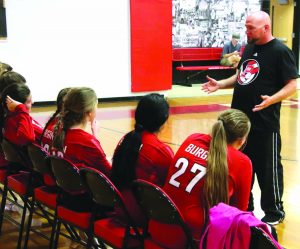 Burgin volleyball Head Coach Rick Stewart (right) talks to his team in between sets against Berea on Monday, Sept. 17.