The West Jessamine Colts (7-2) came into their match up with the Mercer County Titans (3-6-2) on Thursday, Sept. 6, as the best team in the 12th Region through nine games.

That continued after a dominating 7-2 win over a Titan team that has won the region crown the last three seasons.

Two starters for Mercer, seniors Angelo Ontiveros and Johnny Johnston, were out due to injury.

“With West, it was a complete mental breakdown from the beginning. West has a great team this year and they are going to be hard to beat,” said McClain. “But we beat ourselves by not being mentally ready. With injuries, we have a few players playing out of position and not having the normal sub rotations.”

Lucas Labrillazo scored two goals in the second half to secure his hat trick and McCade Collins added two goals for the Colts in the first half.

Labrillazo had a team leading 13 goals heading into this game, adding to his total in a dominating win over the Titans.

West Jessamine has scored 43 goals in nine games this season, compared to Mercer’s 25 goals in 12 games.

The Colts added to that season total just five minutes into the game.

Labrillazo and Gordon Scherer both scored a goal each, and the Titans found themselves down two quick goals early.

A.J. Kinnell added a goal in the 12th minute, and Collins added two goals, the last one being in the final seconds of the first half to take a comfortable 5-0 lead at the break.

Senior Andrew Turpin shot a ball inside the box that went off the post. He followed his shot and easily placed the ball in the back of the net to break the Titans through on the scoreboard in the 54th minute.

The Titans’ threat at a comeback was quickly answered by West.

Labrillazo scored his second goal of the game on a penalty kick after a foul in the box. He completed his hat trick just two minutes later in the 63rd minute, giving his team a 7-1 lead.

The Titans were able to squander a late goal by senior Marcus Lewis in the 79th minute, but the game had been decided at the half.

The Titans have had a very tough schedule this season. They competed at the Purples Classic in Bowling Green from Sept. 1-4, dropping all three games to Warren Central, Calloway County and Daviess County.

“It’s been a tough schedule so far, but once we get healthy, this team has the ability to make a good run at the end of the season,” said McClain.

After coming back from Bowling Green, the Titans tied with Woodford County 3-3 before losing a big district game to the Colts last Thursday.

The Titans will be back on the pitch today, Thursday, Sept. 13, when they host East Jessamine for another big district game. 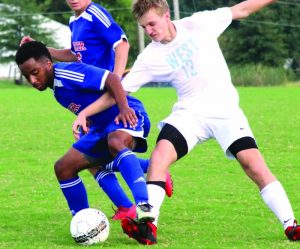