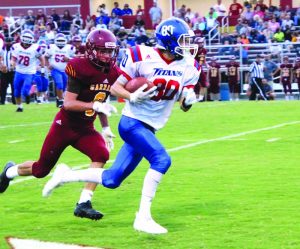 Sophomore Trevor Allen (80) catches the ball and runs down the sideline vs. Garrard County on Friday, Sept. 7. (Photo by Arpan Dixit)

It’s been a struggle for the Mercer County Titans (0-3) so far this season, but that was put on hold during a dominating 49-0 win over the Garrard County Golden Lions (1-2) on Friday, Sept. 7.

This game was won with defense and on the ground. The Titans forced three turnovers, one fumble recovery and two interceptions along with 304 rushing yards to defeat the Golden Lions.

“The last two rushing touchdowns were scored by freshmen. We’re trying to still get better but also use younger guys,” said Head Coach David Buchanan. “We weren’t trying to score a lot of points, we were just trying to work on some things and those young kids did a nice job.”

Junior running back Malachi Yulee led the way for Mercer on the ground with 11 carries for 84 yards and two touchdowns. Junior wide receiver Dillon Warren led the way in receiving with one catch for 37 yards and one touchdown.

“I think the key was our defensive front. They couldn’t block us. Scoring on the first drive was big for us. Our guys did a good job with out offense,” said Buchanan. “I thought the play of the game was when they were driving down the field to make it 14-7, Jon Jon (Logue) picks the ball off in the endzone and we drive it all the way down the field to make it 21-0. I thought that interception turned the game and we tell our guys all the time about big plays, special teams and turnovers. We won all three of those tonight.”

The tone was set on the very first drive of the game. The Titans were able to force a punt and start their first drive on their 40-yard line.

After a 27-yard reception by sophomore Trevor Allen, the Titan were set up at the Garrard 15-yard line.

Drakeford was able to run it in from four yards out to give the Titans an early 7-0 lead.

Garrard County was hoping to answer the Mercer score, but Lane Horn had other ideas. The junior recovered a fumble forced by junior Darrian Baker and gave the Titans great field position at the Garrard 34-yard line.

The Titans faced third down with 12 yards to go before Drakeford rolled to his right and threw a 36-yard touchdown pass to Dillon Warren. The Titans had a quick 14-0 lead after Christina McClain’s extra point.

The Titans forced a punt on the next Garrard drive, but quickly gave the ball back. Brock Coleman intercepted the Drakeford pass and gave the Lions the ball at the Mercer 29-yard line.

The Lions were driving down the field inside the Mercer 10-yard line when the biggest play of the game was made. Logue timed his jump perfectly and intercepted the Brice Burkhart pass in the endzone for a touchback.

Mercer County was able to build off that momentum with junior Bryson Yeast running it in from 27 yards out to make it 21-0 Titans with five minutes left in the first half. The drive was set up by a big run by Drakeford for 41 yards.

The Lions were looking to get one score before halftime, but Logue made his presence felt downfield again. He intercepted the Trace Poynter pass and gave the Titans the ball on their 39-yard line.

With 55 seconds left in the half, Yulee ran it in from nine yards out. Freshman running back Brayden Dunn ran the ball in easily for the two point conversion and the Titans had a comfortable 29-0 lead at the half.

Yulee started the second half like he ended the first, on a 34-yard touchdown run to give his team a 36-0 lead. The drive was set up after a huge return by Warren to the Garrard 36-yard line.

Nothing went right for the Lions all game. Sophomore Jalen Lukitsch ran downfield on the kick off and recovered another fumble forced by Baker. The Titans were pouring it on at this point with no answer from the Lions.

Dunn ran it in from 30 yards out and the Titans had a commanding 43-0 lead.

After forcing a turnover on downs, the Titans took over at their 34-yard line.

Sophomore Bryce Walton entered the game in the fourth quarter and pulled off a 10-yard carry to set up the Titans inside the 10-yard line.

Freshman running back Jackson Peavler ran the ball in from six yards out to make it 49-0 for Mercer’s final score of the game.

Buchanan has preached the need for improvement all across the board for his team to be successful after starting the season with straight losses. It is safe to say the Titans took a big step on Friday night against Garrard County.

“The biggest step we took was when we had success, we kept going,” said Buchanan. “We have a tendency when we have success to relax and tonight we didn’t do that.”

The Titans will be back on the gridiron Friday, Sept. 14, when they host the Lincoln County Patriots at 7:30 p.m. 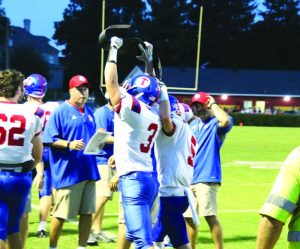 Senior Jon Jon Logue (3) holds up the turnover belt after one of his two interceptions against Garrard County. 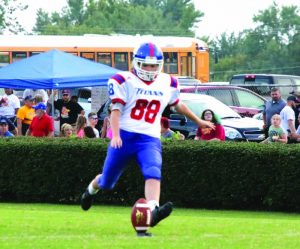 Sophomore Christina McClain prepares for the opening kick off against Garrard County on Friday, Sept. 7. 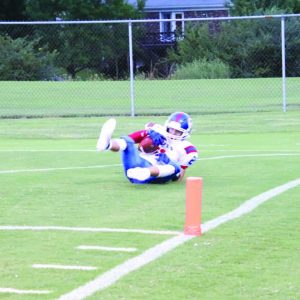