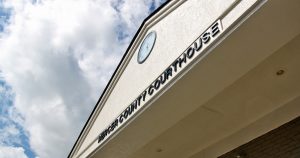 In another contentious meeting, the Mercer County Fiscal Court voted for the second time to raise property taxes.

Magistrate Tim Darland wanted a mulligan on last month’s tax vote when he and the other magistrates opted to increase the rate on real estate to 12.2 cents per $100 in assessed value and the rate on tangible personal property to 17.53 cents.

Darland said he thought he had voted to keep the rates at last year’s levels, which were 11.8 and 16.26, respectively.

“I made a mistake,” said Darland, who moved to reset the tax rate back to last year’s rate.

He wasn’t the only one to get caught short when he read in the Harrodsburg Herald the day after the meeting that he and the rest of the fiscal court had voted for a tax increase.

However, not everyone was surprised.

“I voted yes because I thought we were voting for the compensating rate,” said Magistrate Dennis Holiday.

What the magistrates had approved was the compensating rate, which is calculated by the state finance officer to produce the same revenue for the county as last year’s tax rate. Judge-Executive Milward Dedman estimated going back to last year’s rate would cost the county government up to $60,000 in lost revenue.

Mercer resident Terry Dunne asked about the correlation between the numbers provided by the state and the revenue the county actually receives. Dedman replied that the difference between the two was basically delinquencies. That was one of the reasons, the judge said, that the county came up short on projected revenues last year.

In the end the magistrate split the vote, with Darland, Ronnie Sims and Jackie Claycomb voting to reset the rates and Donnie Webb, Wayne Jackson and Dennis Holiday voting to keep the previously approved rate. Judge Dedman cast the tie-breaking vote.

Dedman also defended the amount the county kept in reserve, pointing out that the county takes in no money from July—the beginning of the fiscal year—until November.

The new tax rate will add $4 to the tax bill for a property assessed at $100,000 in value. Dedman said other taxing districts in Mercer County charge a lot more than the fiscal court.

“I could care less,” said Adkinson, who, at one point, asked Magistrate Sims to step outside the courtroom so they could settle the issue with their fists.

Sheriff Ernie Kelty wedged himself between the two men, who shook hands after the meeting was over. Still, Adkinson criticized how the fiscal court handled taxpayer’s money. He said the county needed to shop around for better interest rates.

Judge Dedman pointed out that the county already does that.

Dedman also announced that he had appointed Mark Morris of JVM Motorsports to a three-year term on the Harrodsburg-Mercer County Tourist Commission. Morris will represent the Mercer Chamber of Commerce on the board of directors. The tourist commission lost three members who did not live in Mercer County—including Dixon Dedman of the Beaumont Inn, who has challenged how the tourist commission distributes the funds collected from restaurant and lodging taxes.