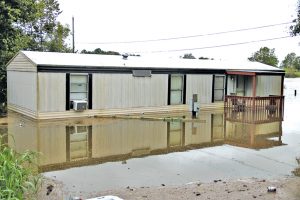 Families have been forced to flee their homes and two Burgin residents have been evacuated by first responders after this weekend’s heavy rains left large parts of the city under water.

This weekend’s rains have hit Burgin hard, leaving standing water in several areas. Flooding has forced families from their homes and one resident had to be evacuated. City and county officials are looking to Frankfort for relief.

“It is a difficult situation,” said Mayor George Hensley. “I can’t pump it out because it would just cause flooding in the next area.”

While Burgin has always been susceptible to flooding—with several severe events earlier this spring—the mayor called this weekend’s inundation “worse than I have ever seen it.”

While Water Street was the worst hit, flooding was spread across the city, Mayor Hensley said.

“We had over a foot of water over the road on Pleasant Hill. That is unheard of,” he said. “The rain came too hard and too fast this week and I haven’t seen it this bad in a long time.”

Steve Sanders lives on Mill Street. While the flood waters had reached his yard, they had not reached his house, he said.

“It has to get real bad before it gets into my house,” Sanders said. “I just hope it doesn’t rain any more.”

Rain is not expected again in Mercer County until Saturday night, according to the National Weather 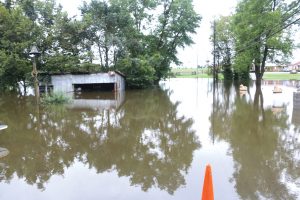 A flooded shed and driveway on Third Street in Burgin.

Between 5 a.m. on Sunday, Sept. 9, and 5 a.m. on Monday, Sept. 10, water at Dix Dam rose over a foot, from 733 to over 734 feet, according to the National Weather Service. Even with that, Mercer County did not receive as much rain as other parts of the state, where as much as 15 inches were recorded. Still, Kentucky Routes 152 and 33 were almost impassable, said Mercer County Emergency Management Director William McFerron.

McFerron stopped by Burgin City Hall on Monday to help a Burgin resident apply for disaster relief. McFerron, who just took over the emergency management office, said he was trying to contact Frankfort to see if there was any assistance available for the city.

It wasn’t just Burgin that was hit hard by this weekend’s rains. In Mount Sterling, up to 30 homes and 20 businesses were impacted by flooding over the weekend, according to the Lexington Herald-Leader.

In Louisville, one cab driver was killed in a flash flood, according to the Associated Press, while first responders in Morehead were searching for a child who had been swept into a culvert by floodwaters.

“The slogan ‘Don’t Drown, Turn Around’ applies to Kentucky,” McFerron said. “Most people injured in a flood here is due to the road being washed out.”

The biggest threats to Mercer County are flooding and tornadoes, he said, and, “Flooding is more difficult to get prepared for because if you are in a flood zone there is nothing you can do.”

His words of advice? “Just stay aware and the best advice I can give as a first responder is to make sure there is gas in your vehicle.”