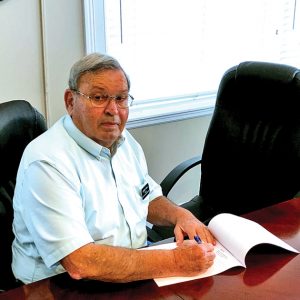 Harrodsburg Mayor Eddie Long signs the deed to the former Caldwell Tank building, which the city will turn into a new police headquarters and a fire station.

The motor vehicle tax rate, which is calculated by the state, will remain at 23 cents per $100 in assessed value, the same as last year. The commissioners gave first reading to the city ordinances setting the tax rates Monday night. They will give the ordinances second reading at their next meeting, on Monday, Sept. 24, at 7 p.m.

The city is also establishing a two-hour limit on certain parking spots on Lexington Street and East Poplar Street after complaints from a local merchant at the last meeting.

Accountant Noel Turner, who owns several buildings along Lexington, approved of the move.

“Our clients have a hard time finding places to park,” Turner said.

Commissioner Charlie Mattingly said signs for the new time-limited parking spots should be up by the end of the week.

Mattingly also introduced a city ordinance that would include several streets, including Shewmaker Lane, part of the city maintenance program. The commission will give second reading to the ordinance at their next meeting.

The commission also announced the sale of the former Caldwell Tank building on Louisville Road has been finalized. The city paid $675,000 for the property without any financing. The next step is to invite HVAC, plumbing and other contractors to inspect the building before bidding to make repairs.

“It will improve the overall safety of the community,” said Commissioner Scott Moseley.