It’s been a tough season for the Burgin Lady Bulldogs (0-10) volleyball team.

That tough stretch continued on Thursday, Sept. 6, in a straight set loss to the East Jessamine Lady Jaguars (12-4).

The scoreboard might not show it, but the Lady Bulldogs were involved in some entertaining points against East.

Freshman Brynn Simpson, sophomore Laura Burke and senior Katelyn Stewart each were responsible for multiple points in each set.

Despite struggling all year long, Burgin has a very young team. Some players on the team haven’t played volleyball until this season.

Head Coach Rick Stewart knows building a successful program is a big work in progress, and knows that his young players are capable of becoming very good volleyball players further into their high school careers.

He gave his thoughts after a tough match.

“We are at a point right now with a young team to get past learning the basics and now focusing on how to push ourselves mentally and physically to give it our all the entire game,” said Stewart. “We have had a good week of practices this week so hopefully that continues the rest of the season as we continue to get into the gym and work.”

Burgin has 14 games left on the season, including two matches against West Jessamine and one against Mercer County.

They will be back on the court today, Thursday, Sept. 13, when they host Garrard County at 6 p.m. 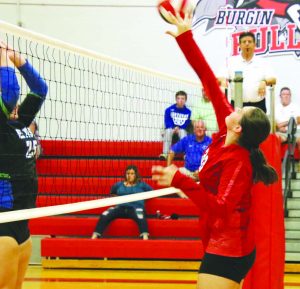 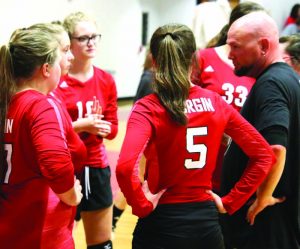