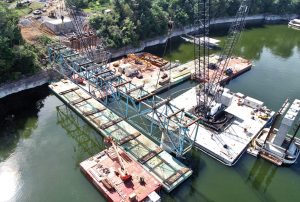 Low bridge ahead. Walsh Construction moves the last segment of the old Kennedy Mill Bridge—which has stood over Herrington Lake since 1924—onto a barge. The bridge was moved to another site to be dismantled.

The last part of the old Kennedy Mill Bridge’s metal substructure was hauled away last week and workers with Walsh Construction Company are now waiting on some real heavy metal.

Beginning next week, the contractor will begin accepting delivery of massive girders. The girders, which are 136 feet long, weigh over 190,000 pounds and were manufactured in Bowling Green, will connect the piers Walsh has already constructed for the Kennedy Bridge replacement.

Buch said it would take about a month and a half to install the girders. They would work over the winter pouring concrete.

Buch said the recent heavy rains, which have flooded large parts of Burgin, have not impacted the project. In June, torrential downpours forced Walsh to stop work on pier one, which sits on the Mercer County side.

The finish date for the contract remains November 2019, which would leave commuters and local businesses without an easy way to cross Herrington Lake for another summer.

Walsh is still talking with the state about accelerating the project. If the two sides can come to terms, Buch has said an early summer opening might be possible. However, there was nothing to report on the negotiations, which are still ongoing.

“There is nothing to disclose,” Buch said.