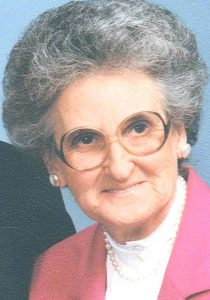 Born Dec. 7, 1918, in Trimble County, she was the daughter of the late Daniel Buckner and Flora Merrick Prather.

She was a homemaker and farmer and a member of the Salvisa Baptist Church since 1951.  She enjoyed quilting, cooking, gardening and doing seek and find puzzles.

Funeral services were held Tuesday, Sept. 11,  at the Salvisa Baptist Church with Jonathan Jones and John David Lane officiating.  Burial was in the Spring Hill Cemetery.

Expressions of sympathy may be sent to the family at t www.alexanderandroyalty.com.