It is unfortunate that  javelin is not a contested sport at the high school level in Kentucky, because one Harrodsburg native is among the best in the country.

Meghan Owens, a senior at Mercer County Senior High School, competed at the AAU Junior Olympics in Des Moines, Iowa, on Friday, Aug. 3, and won the 17 and 18-year-old division to claim her sixth national championship in the javelin throw.

The meet included some of the best professional and collegiate throwers in the United States. Owens was the youngest in the field.

The qualifying process begins at the state level.

“It was a great opportunity for Meghan to get to compete at the highest level in the United States,” said her father, Scott Owens.

It has been a challenging year for Owens. Back in January, she had her gallbladder removed.

“She had surgery in late January to remove it, which kept her off her feet and out of school for two weeks,” said her father. “She slowly was able to return to working out, but had to make major adjustments to her schedule.”

After all that, Owens wasn’t just thrilled to win, she was happy to still be able to compete.

“The feeling was more of relief than anything. I was very happy that I won my sixth national championship, but it had been a long, stressful season, and I was ready to take a break from throwing for a while,” said Owens. “I was a little nervous for the first couple of throws at the Junior Olympics. I made an adjustment on my third throw, and put up a pretty big number. After that, I was able to relax, and go for bigger throws.”

That’s not all the accomplishments for Owens this summer.

She also competed in her first U.S. Outdoor Championships that was also held in Des Moines in June.

The U.S. Outdoor Championships is the highest level of competition for track and field athletes in the country.

The javelin throw event was won by 32-year-old Kara Winger, who is a three-time Olympian, eight-time national champion and American record holder.

“I wasn’t as nervous during the Outdoor Championships,” said Owens. “I knew I wouldn’t have a shot at the win that day, but felt blessed to have the opportunity to compete with the best of the best throwers in the country.”

Her father said the goal for the meet for her was to have fun and get to compete in the event.

“To be successful at that level, you have to not only be a great thrower, but also be able to perform under extreme pressure,” he said. “The hope is that she can use the experience she gained to her advantage if she is able to get back there in the future.”

Owens hasn’t decided on her future after high school yet, but plans to take visits to several campuses this fall.

“I will ultimately choose the college that feels like home to me,” said Owens.

The ultimate goal is to become a professional, and Owens knows it will take a lot of hard work, time and dedication to get there.

“I’m going to work hard in the offseason doing strength training and conditioning,” she said. “Once I ease back into throwing, I have some things to work on in my technique that will hopefully add some good distance for me.” 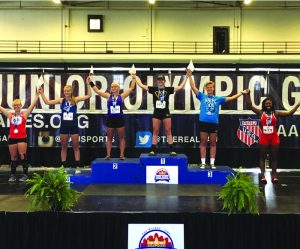 Meghan Owens (middle) sits atop the podium at the AAU Junior Olympics on Friday, Aug. 3. This was the sixth time Owens has stood on top of the podium as a national champion. (Photo Submitted) 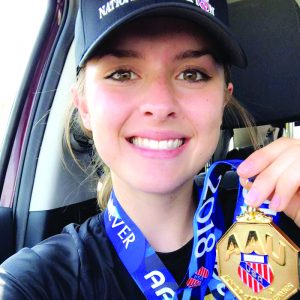 Meghan Owens is pictured with her national championship medal at the AAU Junior Olympics in Des Moines on Friday, Aug. 3. (Photo Submitted)