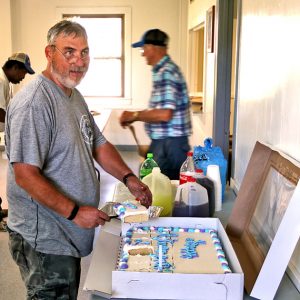 Leo Vaughn said his diagnosis has given him a new appreciation for life. “I’m living now,” Vaughn said.

Leo Vaughn knew exactly what he wanted for his retirement party. He wanted something to eat, he didn’t want any speeches, and he didn’t want a Wildcat blue ribbon on the oak rocking chair the city gave him.

“I would have been mad if you put a blue ribbon on that chair,” said Vaughn, a Louisville fan.

Vaughn, the supervisor of public works for the City of Harrodsburg, is retiring after 30 years. He doesn’t want to. He could have retired three years ago, but he didn’t because he liked working too much. He liked Harrodsburg too much. 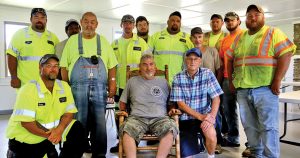 Vaughn was around 23 years old when he started working for the city. He said Mayor Eddie Long—then serving his first term as a city commissioner—asked him if he knew somebody who was interested in a job. Vaughn, who’d worked at two local farms, thought Long was offering a farm job and turned him down. On second thought, Vaughn called up Long and said, “I’m interested.”

“That’s how it happened,” Vaughn recalled Thursday. “I started out at the bottom. I was the lowest paid worker in the city.”

Vaughn was earning $114 a week. “That was big money boy,” he said. He lived in an apartment on Office Street with his first wife and a baby on the way. “I was living large,” he said.

Over the years, Vaughn has spent countless hours plowing snow—sometimes for days at a time—fixing potholes and cleaning out ditches. It was grueling work, but he loved it.

“You fall in love with your job and you just don’t leave,” he said.

The years passed by in the blink of an eye. Vaughn was happy at work. About the only time he ever balked at a job was when the city folded together the street and parks departments into the newly created public works department. They wanted Vaughn to take over the cemetery department too.

“It was nice that they had that much confidence in me,” he said. “But there was no way.”

He had no intention to retire. But last year he was diagnosed with stage IV colon cancer. The prognosis is bleak. Less than 15-percent of patients are still alive five years after their initial diagnosis. But Vaughn is upbeat.

That’s why he didn’t want to sit in the rocking chair presented to him last week by Harrodsburg Commissioner Charlie Mattingly, who oversees the public works department.

“Leo’s taught me a lot,” Mattingly said. “I couldn’t have had a better supervisor.”

Vaughn didn’t even want to sit down to eat. While Mattingly was showing him the chair, he kept eating from a styrofoam dish.

As the retirement ceremony came to an end, they talked him into finally sitting down for a group picture. He practically had to force himself to sit, but he did it with a smile.

Despite retiring, he doesn’t plan on slowing down any time soon. The diagnosis has given him a new appreciation for—well, for everything. Like cake. Especially the big vanilla sheet cake decorated in his honor. He slices up pieces for everyone and grabs one himself.

“I’m going to get me a big chunk of it while I still can,” Vaughn said.