The Mercer County Lady Titans (6-1) have gotten off to a fast start this season, winning six out of their first seven games, including four in a row.

That streak ended on Monday, Sept. 3, falling to the Madison Central Lady Indians (3-1) by a final score of 2-1.

Senior Aubrey Jones scored the only goal for the Lady Titans with just under five minutes left in the game on a penalty kick.

Madison Central was the aggressor from the opening whistle, and scored both of their goals in the first half.

“In the first half, I feel like Madison Central definitely dictated the pace of the game,” said Head Coach Josh Culver. “We were being reactive instead of proactive. It took us a little bit into the first half to settle in, which led to their two goals.:

The Lady Titans were able to come out with more fire and energy in the second half, and had many opportunities to tie and take the lead, but were unable to convert those opportunities into goals.

“We came out a little bit faster and stronger in the second half. We were just unable to make connections in the box,” said Culver. “It was a tough game that we needed. Our schedule just gets tougher and down the road. We have to realize not to get down early and have to fight our way back. Instead, we have to be the team that comes out first and put a couple goals in the net. This was a great game to prepare us for the rest of the season.”

Tristan Hornsby opened up the scoring for Madison Central  in the 15th minute of the game to give the Lady Indians a 1-0 lead.

Shots by senior Lyzzi Prigmore and freshman Kaley Woods a few minutes later did not find the back of the net.

Woods had an aggressive game, making runs on the right side of the field and taking shots but none were able to cut the Central lead in the first half.

Rachel Hughes converted on a penalty kick with 10 minutes left in the first half, which gave Central a comfortable 2-0 lead at the half.

The Lady Indians came out gunning the first few minutes of the second half, but freshman goalkeeper Chase Flach held them in check after giving up two first half goals.

Jones was fouled in the box and was given the opportunity to cut the Central lead with four minutes in the game, and she converted the penalty kick.

The Lady Titans had four minutes to tie the game. They came close, but Central goalkeeper Gabby Duerson propelled her team to the 2-1 victory.

The Lady Titans will be back on the pitch Monday, Sept. 10, when they travel to West Jessamine to take on the back-to-back state champions in a pivotal district game. 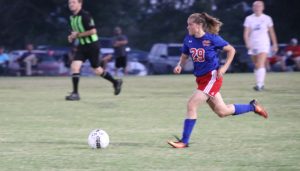 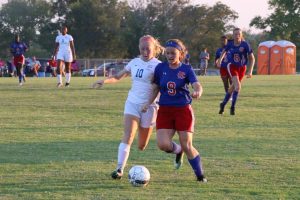