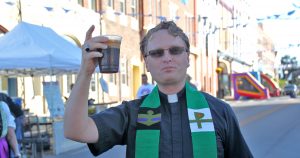 Father Peter Doddema blessed the kegs to start the 2017 Oktoberfest.

The Harrodsburg First Main Street Program has a big October coming up. In addition to the third annual Oktoberfest (Friday, Oct. 12, through Sunday, Oct. 14), Harrodsburg First will also hold the Spooktacular on Saturday, Oct. 27) and the Night of the Great Pumpkin (on Wednesday, Oct. 31). It seems like a lot, but the board of directors say they’re ready.

“I feel if Oktoberfest was next weekend, we’d be ready,” said Allen Goldie, chairman of the Harrodsburg First board of directors.

Goldie said the group has completed the lineup of entertainment—local favorite Power Play will headline Friday night while a Grateful Dead cover band, Born Cross-eyed, will headline Saturday night—for the three day festival as well as the sponsors.

Last year’s festival drew an estimated 8,000 visitors—including tourists from Germany and Holland—to downtown Harrodsburg, even though weather forced the cancellation of the entertainment on Sunday.

“We drew a heck of a crowd last year,” Goldie said. He said they expect to draw an even bigger crowd this year as long as the weather cooperates.

To accommodate all of the new visitors, the festival is being expanded all the way to Office Street.

When the visitors get to Harrodsburg, they will find even more to entertain them. In addition to the return of the distinctive cafe lights across downtown, there will be a laser light show.

While the organizers feel ready to roll, that doesn’t mean there haven’t been some discouraging developments over the past year.

“We’ve had some disappointments,” Goldie said.

While the principal sponsors will be Kentucky Eagle and Pepsi, Harrodsburg First has been unable to get any local factories to sponsor the festival. Goldie said it is because many companies are facing audits or have undergone leadership changes.

“It’s just not their year this year,” he said.

While the organizers feel confident going forward, there are still some details to be worked out. There are still three open spots for food vendors and they still need volunteers. While members of the Harrodsburg Rotary Club will be working the taps again this year, Harrodsburg First has also approached the Heart of Kentucky United Way.

Harrodsburg First is also looking for board members. There are currently four open spots after the resignation of Lisa Morse. While there are two candidates to join the board, the organization needs all the help they can get as they move into their busiest month of the year.

Oktoberfest only takes three days, but it takes a year to plan out. Organizers have made changes to how wristbands and tickets are distributed. They are working with Bluezoom to set up a wifi hot spot in order to run the iPad cash registers.

A lot is riding on this year’s Oktoberfest. Despite drawing thousands of new visitors to downtown Harrodsburg, the other two festival has yet to make any money. Organizers say they have been making big investments over the past two years, including buying equipment that they hope will begin to pay off this year and for years to come.

Find out more at the new Oktoberfest website, oktoberfestharrodsburg.com.