Three Members Expelled From Board Of Directors Due To Residency Requirements 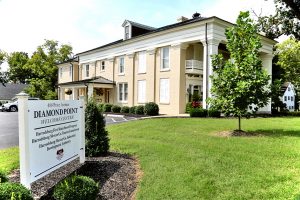 Maintenance of the historic Diamond Point Welcome Center is one of the reasons cited by the Harrodsburg-Mercer County Tourist Commission as to why they must keep money in reserve.

The hot summer continues for the Harrodsburg-Mercer County Tourist Commission. After a rancorous meeting last week, the group has lost three members, including Dixon Dedman, who has challenged the agency to spend more to promote local events.

Dedman, along with board members Nate Patel, who represents Baymont Inn, and former chairman Kevin Hendren, who represents Bright Leaf Golf Resort, can no longer serve on the Tourist Commission’s board of directors because none of them live in Mercer County. According to state law, members like Dedman who represent local hotels must live in the county. Dedman, who represents Beaumont Inn, which his family owns, has lived in Boyle County for over a year.

Dedman was the only one of the three ex-members to attend the meeting, wandered why he was being forced out when he started complaining about how the group handled its finances.

“I find it fascinating that this comes up now,” he said. Dedman has been complaining that the Tourist Commission has not been contributing enough to local events such as Oktoberfest. “No one was aware of this?”

“I don’t understand how you served on this board when you don’t reside here,” said Brenda Roseman, who represents Shaker Village of Pleasant Hill. Roseman said Shakertown officials had been informed of the law before ever submitting names for consideration to the Mercer County Fiscal Court.

Before being kicked off the board, Dedman questioned treasurer JoEtta Wickliffe about the Tourist Commission’s finances.

“I think it’s egregious that we only contribute $5,000 towards things going on in this community,” Dedman said. While the Tourist Commission uses their share of restaurant and lodging taxes to buy advertising, they only hand out $5,000 each year in $500 sponsorships to local events.

Wickliffe said the organization has $756,000 in total net assets. Nearly half of that amount—over $305,000—is being held in reserve in case of closings.

She also told Dedman and the unusually large crowd which gathered for last Wednesday’s meeting—including Mayor Eddie Long, Judge-Executive Milward Dedman and State Rep. Kim King—that the commission had a $148,000 carryover, which included $122,000 kept in an escrow account to repair the roof of the Diamond Point Welcome Center.

“We have over 700 and how many thousands of dollars in the bank,” Dedman said. “It seems deceitful in my opinion.”

The treasurer likened the Tourist Commission’s finances to the discrepancy between a checkbook and a bank statement, which does not include outstanding checks. Dedman didn’t accept Wickliffe’s explanation.

“You can’t put all those things against our bank balance and also put it against our budget,” Dedman said. “I don’t believe, based on this, that we’re doing what we should be doing.”

Wickliffe said the Tourist Commission was following both established accounting procedures for nonprofit organizations as well as state and local ordinances.

“I don’t know how else to explain it,” she said. “We have been as transparent and as open as we could be.”

Wickliffe suggested the Tourist Commission’s accountant be invited to the next meeting and explain the financial situation.

Wickliffe said Freeman and others in attendance had been “fed false information.” She also said the previous owner of the Diamond Point Welcome Center—the Diamond Point Foundation, whose members were made up of members of the Harrodsburg First Main Street Program’s board of directors, which included Dixon Dedman—had not made necessary repairs on the historic building.

“We were forced into buying this building,” she said. “We got stuck with all the repairs.”

When Dedman asked if she was referring to him specifically, she said, “If the shoe fits, wear it.”

The directors went on about their business, approving several measures proposed by Dedman, including sending a financial report to board members before the meeting and to send out a bank balance to board members. They also approved a $500 sponsorship for the National Guard’s event on Nov. 10 honoring the 75th anniversary of the Bataan Death March and declined sponsoring the Harrodsburg Historical Society’s Holiday Homes Tour on Nov. 30. Wickliffe and Hackett said the Tourist Commission turns over half of all revenues collected to the city, which hands out grants to promote local events that promote tourism in the area. Wickliffe said to give money to an event that is already collecting tourism funds from the city would amount to “double dipping.”

“Who cares?” Dedman asked. “I guarantee you the city would be just fine with it.”

Kathryn Tuggle, who has been acting chair of the board of directors since the resignation of Lois Mateus, said that would be in violation of city ordinances. “That’s the law,” Tuggle said. “That’s the ordinance.”

Dedman said he was going to take his concerns to Mayor Long. “I want to change the policy,” he said.

Ironically, Dedman’s removal from the board came as a result of an effort to remove Wickliffe, who has served with the board for decades. Art Freeman wrote a letter to Mayor Long which included a copy of Wickliffe’s voter registration in Florida. Wickliffe and Hackett met with Mayor Long and Judge-Executive Milward Dedman. After going over the statutes, they determined Wickliffe was within the law but that Dixon Dedman and the others were not.

This leaves the Tourist Commission in a quandary. With the three expulsions and the resignation of Lois Mateus earlier this year, they don’t have enough members to make a quorum, the minimum number required to make their proceedings valid. Several people in attendance said that Dedman’s expulsion meant that everything in the meeting did not count, but the remaining board members said they had already moved to adjourn before removing Dedman from the board.

After the meeting, Judge Dedman said he would come up with the names of three individuals who reside in Mercer County who could serve on the board. He said Dixon Dedman and the other members would have been fine if Mercer County had a hotel and restaurant association. “It takes the restaurant and hotel people getting together and starting an association,” Judge Dedman said.

The next meeting of the Harrodsburg-Mercer County Tourist Commission will be Wednesday, Sept. 12, at 8 a.m. at the Diamond Point Welcome Center.