Mother nature made her presence felt on Friday, Aug. 31, when the Mercer County Titans (0-2) fell to the  Anderson County Bearcats (2-0) by a final score of 28-0 in one half of play.

Rain fell prior to the game, but a couple strikes of lighting was the deciding factor in not continuing the second half.

Head Coach David Buchanan said Anderson County had a great game plan coming out and made it tough for his team in the only half of play.

“Their offense was very good. The scheme was outstanding and they have very good players to go with it,” said Buchanan. “Our inability to score in the red zone made it even tougher.”

Charles Collins had himself a half. The sophomore running back for Anderon County was responsible for 21 out of the 28 points the Bearcats scored. Overall, Collins had seven carries for 132 yards and three total touchdowns.

He caught a 25-yard touchdown pass from quarterback Jagger Gillis to give the Bearcats a 7-0 lead in the first quarter.

The Gillis name might be familiar. Jagger is the younger brother of former Titan quarterback Gunnar Gillis, who is now playing at the collegiate level at Campellsville University.

Junior running back Malachi Yulee had a couple strong runs in Mercer’s first drive, but the drive ended in a turnover on downs. Yulee had a total of 86 yards on 13 carries.

On the following play, Collins took it 87 yards to the house on a run to the right side. It was quickly 14-0 Bearcats.

The following drive was one to forget for the Titans. After an intentional grounding penalty, the Titans faced fourth and long. After mishandling the snap, Anderson County had great field position to start their next drive on the Mercer 30-yard line.

After a couple Gillis runs, Collins finished the drive with a two-yard touchdown run. The Bearcats took a 21-0 lead with 10 minutes to go in the first half.

The Titans turned it over on downs again and gave Anderson County the ball on the Mercer 37-yard line.

After a holding penalty took away a Gillis touchdown pass to Collins, junior defensive back Dillon Warren intercepted the Gillis pass to give the Titans possession at their 14-yard line. Gillis finished 4-of-6 for 100 yards passing and two touchdowns.

Senior wide receiver Jon Jon Logue caught a 28-yard pass from junior quarterback Kaelin Drakeford to pick up a first down, but the Titan drive ended with a punt by Noah Davis. Drakeford also ran five times for 35 yards.

Drakeford finished the night 5-of-9 for 50 yards.

Gillis added an eight-yard touchdown pass late in the second quarter to give his team a 28-0 lead heading into the locker room.

Buchanan wants to see improvement in every aspect of the game heading into next week’s match up.

“We are focusing on overall improvement across the board,” he said. “We played our best half on Friday night, we just need to build on that.”

Logue led the Titans in receiving with two catches for 30 yards.

They will be back on the gridiron Friday, Sept. 7, when they travel to Garrard County. 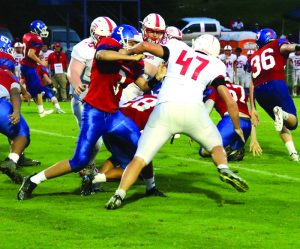 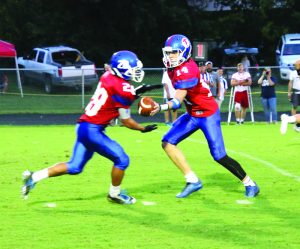