The Titans (0-1) came to the Rebel Bowl at Boyle County High School to take on the Waggener Wildcats (0-1) on Saturday, Aug. 25, after losing a heartbreaking season opener to John Hardin last week.

Unfortunately, the result at the end of the fourth quarter stayed the same for Mercer County, who lost 34-14 on a night where Waggener ran for 275 yards and four touchdowns.

“Jones did a great job of running the ball,” said Head Coach David Buchanan. “On defense, their linebackers were fast enough to go backdoor on us and make the plays. Their overall team speed was very good.”

Buchanan wasn’t kidding. The running back, Jones had 14 carries, 142 yards and two touchdowns.

This wasn’t just any match up. It was teacher vs. student.

Waggener is coached by one of Buchanan’s former players at Mason County, Jordan Johnson.

“First thing he said to me when I got on the field was that it was awkward, which it was,” said Buchanan. “But I am so proud of him, the job he does as a coach and what he does to take care of his kids. I hate losing so none of that helped on Saturday, but stepping back at the big picture, I could not be prouder of Jordan.”

It started out well for the Titans on their first drive of the game.

After one first down run each for junior quarterback Kaelin Drakeford and junior running back Bryson Yeast, Drakeford found senior Jon Jon Logue for a 27-yard touchdown reception. Logue caught the ball at the 15-yard line, made a couple athletic moves, dove for the endzone and put the Titans up 7-0 after Christina McClain’s extra point.

Mercer County was able to force a third-and-long for Waggener, but gave up an automatic first down on the next play after a facemask penalty. On the very next play, Jones utilized his power and speed and ran for a 30-yard touchdown to tie the game at seven.

After a Noah Davis punt, Waggener was driving down the field and in Mercer County territory before Yeast picked off Waggener’s Marshall Barnes at the 25-yard line.

Mercer County marched to the Waggener 43-yard line, facing third-and-24, when Drakeford found sophomore Trevor Allen down the Mercer sideline for a long completion for a first down, 42 yards to be exact.

After that momentum-swinging catch by Allen, momentum shifted right back in favor of the Wildcats. Michael Richardson blocked McClain’s kick on fourth down, and to make it even worse for the Titans, took it back 90 yards for the score. Waggener held a 14-7 lead with just under four minutes left in the first half.

The Titans punted on their next possession, hoping to stop the Wildcats and trail by only one score heading into halftime, but that wasn’t the case.

Jones scored on a 65-yard touchdown run to give Waggener a 20-7 lead with just under two minutes remaining in the first half.

Mercer County attempted a long pass play in the final seconds of the half, but Drakeford’s pass was intercepted by Alijah Sickles as time expired. That was Drakeford’s only interception of the game, and second on the season.

After picking up a first down on their first drive of the second half, the Wildcats were forced to punt.

On the first play from scrimmage for the Titans in the third quarter, junior Malachi Yulee broke off a 75-yard touchdown run to cut the Wildcat lead to 20-14. Yulee showed off his speed and power, breaking away for the longest run in his varsity football career so far.

Every time Mercer gained a little momentum, Waggener took it right back, as they did the following drive.

Trevon Davis caught a 24-yard touchdown from Barnes to quickly retain the two-score lead, 27-14, which they took into the final quarter.

Mercer County wasn’t able to score in the fourth quarter, while Waggener added another touchdown  when Andreiss Charlton ran it in from a yard out with one minute left to play.

Despite the tough loss, Buchanan said he saw his team make strides, but still needs that effort consistently for his team to be successful.

“I saw flashes in spots, yes, but overall it wasn’t a strong performance and we have a lot of room to improve,” he said. “Also, give Waggener credit for playing a very good game.”

Mercer County had 178 yards rushing, led by Yulee with 82 yards and one score. Drakeford’s numbers were pretty favorable, considering he is playing a new position. He went 10-for-18 with 132 yards, one touchdown and one interception. With his athletic ability and potential, don’t be surprised to see Drakeford put up more impressive numbers in games to come.

The Titans took two losses on Saturday night. Senior wide receiver and defensive back Mason Darland left the game in the second half with a broken collarbone, and Mercer County Athletic Trainer Casey Riley confirmed Darland could miss the rest of the season.

“Mason (Darland) has worked like a mad man to improve,” said Buchanan. “We are losing a high character, quality player and person.”

Buchanan wants to see improvement in every aspect of the game before next week’s match up.

“We need to improve across the board,” he said. “Offense, defense, special teams, effort, tackling, blocking, etc.”

The Titans will be back on the gridiron on Friday, Aug. 31, when they host the Anderson County Bearcats at 7:30 p.m., in the Farmer’s National Bank Game. 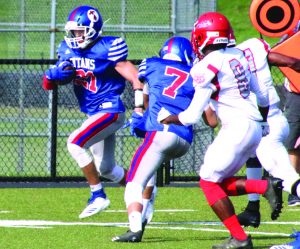 Junior Dillon Warren (left) dances along the sideline during a kick return. (Photo by Arpan Dixit) 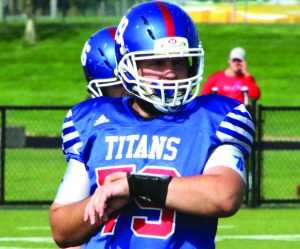 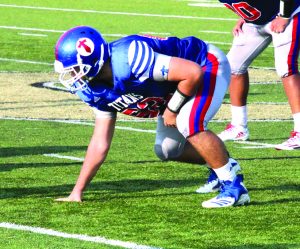 Senior Sam Warren sets up on the line and prepares for the rush on Saturday, Aug. 25, against Waggener in the Rebel Bowl. (Photo by Arpan Dixit) 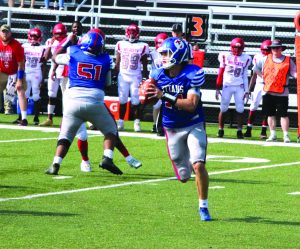 Junior quarterback Kaelin Drakeford rolls out to his left while sophomore tackle Jesus Garcia (51) protects him. (Photo by Arpan Dixit)