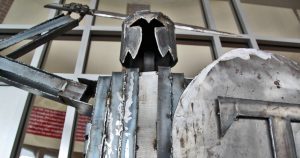 The Mercer County Board Of Education approved a tax raise after a public hearing. For a $100,000 property, the owner can expect to pay $27 more in property taxes on their next tax bill.

The Mercer County Board of Education is raising the tax rate on real estate and personal property to 69.2 cents per $100 in assessed value from 66.5 cents.

At a special-called meeting held last week, the school board voted 4-1 for the increase, with board member Larry Yeager voting against it. Yeager cited opposition from citizens living within his district as his reason for voting against the increase.

The decision will not raise Mercer homeowners’ tax bills four-percent. Rather, the move will raise district revenue by four-percent.

Property owners can expect their taxes to go up 2.7 cents per $100 in assessed value, according to Finance Officer Amber Minor, which would translate into a $27 increase for someone owning $100,000 in property. The raise is expected to increase district revenue by $193,406 for fiscal year 2018, Minor said. Over $101,000 of that additional revenue will be used to restore section 6 funding which had been cut. The remaining money will be allocated for section 7 funding for student supplies, officials say.

The school board had three other options under state law: to take the compensating rate, which would generate the same amount of money as last year; a subsection (1) rate, which would have been 67.1 per $100, or to leave the rate unchanged, as the district voted to do as recently as 2016. However, the other options would have raised less money for the schools at a time when state and federal funding are declining.

Only two people spoke at the tax hearing before the vote and both of them opposed the increase.

“Throwing money at something will not make a lasting cure, but fixing the problem will,” said Waldon Adkinson.

Adkinson listed some recent expenditures he disagreed with, including hiring an engineering firm to design a canopy for King Middle School and increased spending for school security as a result of last year’s school shootings. Statistically speaking, the risk of a school shooting in Mercer County was small, Adkinson said.

“There’s been more killed by lightning,” he said.

Adkinson also asked why the board hadn’t sold the Harlow Education Center—which, in addition to housing the administrative offices, also holds the day treatment program and Mercer Central, an alternative school program—along with other buildings the district has sold, like the former Harrodsburg High School. District officials say they are forbidden under state law to sell the Harlow building, which still has outstanding bonds.

The other speaker was Rita Durr, who also opposed the tax increase.

“As a former teacher, I always had a lot of concerns about where the money is spent,” Durr said.

She said she knew the administrators had a difficult time making ends meet. “I also know how hard it is to make ends meet at home,” she said.

Durr said there were a lot of Mercer County residents living on fixed incomes.

“They’re going to be affected by the tax rate,” she said. “When is it going to stop?”

The Burgin Board of Education will hold a public hearing on the tax rate on Thursday, Sept. 6, at 7 p.m. in the school library (440 East Main Street, Burgin). The board is considering whether to raise property taxes to 77.5 cents per $100 in assessed value. The hearing was moved back after the district was unable to advertise the hearing for two weeks as legally required.

Superintendent Dennis Davis said he didn’t like paying higher taxes either, but he said the state funding is shrinking. Ten years ago, the state paid 59-percent while county residents paid 41-percent. Today, that ratio is 50–50, Davis said.

He said projects like installing a canopy at the middle school are a good use of capital outlay funds. Of the 69.2 cents the district takes in, 16.8 cents is restricted for building and construction while 52.4 cents goes towards operations and instruction. Under state law, the district can only use that money for construction projects.

The next meeting of the Mercer County Board of Education will be Thursday, Sept. 20, at 5:30 p.m.

Learn more about taxes in Mercer County in this week’s issue of the Harrodsburg Herald.