Senior Andrew Turpin scored one goal in the first half, but dominated the second half of the game on the offensive side of the ball.

Both teams got off to a slow start, struggling to possess the ball in the final third of the field. It wasn’t until sophomore Jamie Bordeaux’s shot 10 minutes in that either goalie saw any action.

”We made the change to get a little speed up top and to get into our attacks a little quicker,” said McClain. “We just wanted to change things up and it turned out wel for us.”

Nathanial Lilly for East scored the first goal of the game in the 18th minute, but Turpin quickly answered a few minutes later by winning a ball and easily putting it into the back of the net.

Both teams were tied at the half.

The second half was a much different story for both teams. Mercer was on the attack, not letting up and applying pressure, while the Jaguars weren’t able to muster up many opportunities.

Senior Luke Dean scored the go ahead goal for Mercer on a beautiful lob shot from 10 yards outside the top of the box. Dean tried again from a little further out a few minutes later, but was unable to connect.

Turpin added two more goals in the 51st and 53rd  minute to put the game out of reach.“He was making the right runs and he finished well. Those are things we’ve been working on this season and will continue to work on,” said McClain. “

The Titans will be back on the pitch Friday, Aug. 31, when they travel to Bowling Green to take on Warren Central in the Purples Classic. 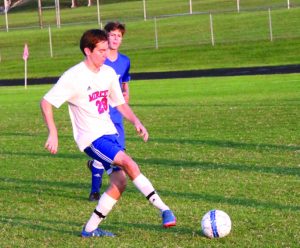 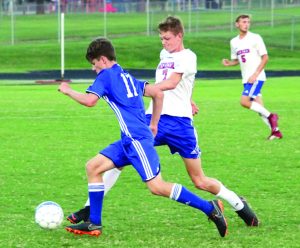