It has been a solid start to the season for the Mercer County girl’s soccer team, and that continued in a 7-0 victory over the South Laurel Lady Cardinals on Monday, Aug. 27.

Mercer County dominated possession, keeping the ball on their side of the field majority of the match. South Laurel almost scored in the opening seconds of the game, but struggled the rest of the way.

“That’s one of the things we talked about from the previous game is that I want them to apply good enough pressure that the ball shouldn’t be on our half of the field defensively,” said Head Coach Josh Culver. “Because if we can just keep it on the offensive half, you don’t have to do any extra running back to your own goal.”

The Lady Titans are coming off a shutout win at Western Hills on Saturday, Aug. 25, and that level of play carried over against the Lady Cardinals.

They’ve done a lot better job of the things we have asked them to do. I can tell you that tonight’s game compared to the Western Hills game; we performed much better in the first half,” said Culver. “The intensity was higher, back line was swinging the ball. Just our overall ball movement was really good. “

Freshman Kaley Woods opened up the scoring for Mercer in the sixth minute to make it 1-0.

Dean scored the first of her three goals on a penalty kick. She effortlessly took the penalty, giving South goalkeeper Haley Britton no chance at the save. Dean is only a sophomore, but has plenty of varsity experience, starting majority of games her freshmen season.

“Abby (Dean) has such a great touch, good vision on the ball and great footwork. She’s able to manipulate the ball and do what she wants to do with it,” said Culver. “She’s one of those players that can take a couple extra touches because the ball stays at her feet, doing a great job of keeping her body in between the ball and defender.”

Culver said he and his staff have been working with Dean on being more vocal, calling for support on attacks.

Mercer’s leading scorer coming into this game was sophomore Bella Garrett with four goals. She added to that total against South in the 27th minute, giving her team a 3-0 lead.

Dean, just six minutes later, scored on a beautiful strike from the top of the box to give Mercer a 4-0 halftime lead.

The second half was much of the same. Prigmore scored just four minutes in after receiving a great ball from junior Abby Steele. Dean completed her hat trick just three minutes later, tying Garrett for the team lead in goals on the season with four. She collided with Britton in the penalty area, won the ball and easily kicked it to the back of the net. Britton had to leave the game due to an injury to her leg.

Sophomore Jo Beth Connelly added a late goal in the 76th minute to complete the 7-0 shutout.

Culver was able to play a lot of young players and liked what he saw. The effort was always there with his team tonight.

“I saw a lot of fight and a lot of heart. They were hungry, and that was awesome to see. They did not let up and they played the way we’ve been wanting them to play,” said Culver. “They were constantly attacking and it was just awesome to see the youth get out there and want some goals. I was just impressed with how they went out and approached the game. We got a lot of youth, a lot of players and our future looks good.”

The Lady Titans will be back on the pitch today, Thursday, Aug. 30, when they host the Somerset Lady Jumpers at 6 p.m. 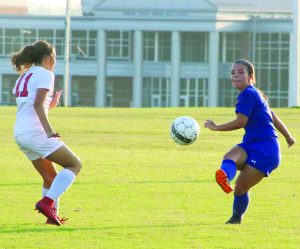 Senior Hunter Robinson (right) passes the ball down the sideline against South Laurel in a 7-0 Mercer County victory on Monday, Aug. 27. (Photo by Arpan Dixit) 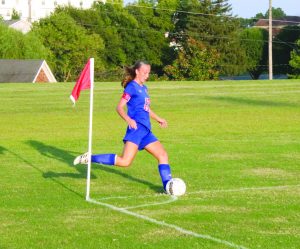