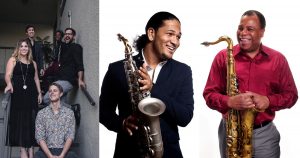 Among the new acts playing at this year’s Jazz Festival are the Cosmic Collective, headliner Adrian Crutchfield and Brooks Giles III.

There will be high spirits and hot music in Hog Town when the Fort Harrod Jazz Festival returns for three days of bands, art and good times starting on Friday, Sept. 14.

The festival is in its fifth year and has grown from three bands to 18 bands over three days. Now, around 25 sponsors and many volunteers make the Jazz Festival a “go to” event.

“We have both repeat bands and some new groups this year with national, regional and local bands playing,” said Sam Carr, committee chairman for the Fort Harrod Jazz Festival. “The festival theme this year is “Perfect Fifth” in reference to the five year anniversary and music term for a major fifth interval on a scale.” 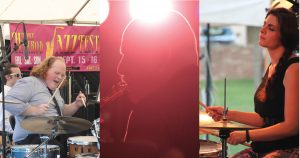 Among the returning acts at this year’s Jazz Festival are the Eastern Kentucky University Jazz Ensemble, Blue Groove Jazz and the Sofia Goodman Group.

The headline act is Adrian Crutchfield, the last horn player to record and tour with Prince. Carr was impressed Crutchfield reached out to him to perform at the festival.

Crutchfield spoke of his time with Prince. “I spent four and a half years learning from and performing with the most prolific artist of our time.”

Crutchfield has toured with many great artists in addition to Prince, such as Bette Midler, Lionel Richie, Anthony Hamilton and Bootsy Collins. He contacted Carr about playing in Harrodsburg.

“I keep looking for different festivals that look like they had good energy in markets I was not familiar with. And that’s how I found this one,” said Crutchfield. “I’m looking forward to connecting with a whole new fan base and making new lifelong friends and supporters.” 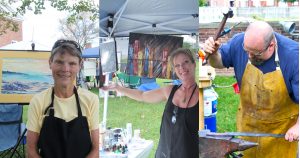 On Saturday, Sept. 15, there will also be an artists expo during the Jazz Festival. From last year’s festival (left to right): Jacquie Woodward, Amy Gray and Chris Smith

“I’ve spent most of my career traveling and performing for other artists, now it’s my turn to show my own style,” Crutchfield continued. “That’s what it’s all about, without the support and love from people like you guys, then there is no point in traveling at all.”

Carr collaborated with Mercer Chamber of Commerce’s Executive Director Jill Cutler and David Coleman, park manager of Old Fort Harrod, to start the festival back in 2013.

The Jazz Festival is more than just jazz music, there will be an artisan exposition on Saturday, Sept. 15, that will feature over 30 artists.

For the full lineup, check out this week’s issue of the Harrodsburg Herald.