On a rainy and muddy evening at Alvis Johnson Field on Saturday, Aug. 18, the Mercer County Titans (0-0) suffered a season-opening 20-19 loss to the John Hardin Bulldogs in the Little Caesar’s Ft. Harrod Bowl.

The Titans held a 12-0 lead at halftime, eventually building the potential shutout to 19-0, but John Hardin’s Justin Russell hit Aaron Scott in stride on a slant for a 34-yard touchdown. Josh Garrett added the two-point conversion to give the Bulldogs the lead before stopping a game-winning field goal attempt by Mercer kicker Christina McClain, who is the first female football player in Mercer County history.

“I think we can play at a really high level, but it’s got to be a lot cleaner. There are too many mistakes and overall we just have to play a cleaner game,” said Head Coach David Buchanan. “When things get a little tough, we have to fight harder. We fought hard at the end, but if we fought harder earlier, the outcome might have been different.”

Buchanan wants his team to play hard every minute on the field and not let up when they have a big lead.

“This is the thing I feel like we deal with. When we have success, we exhale. We went up 19-0, we exhaled. Unfortunately, until we learn to handle success, that’s what we’re going to battle,” he said. “And that’s what has to change in order for us to be successful.”

John Hardin’s first drive was halted with an interception by senior Mason Darland on a long pass play. Mercer quickly went three and out, but were able to stop John Hardin on fourth-and-three to get the ball back.

Junior quarterback Kaelin Drakeford drove Mercer down the field with a couple of strong runs to set the Titans up in the red zone.

Drakeford ended the day going 6 for 11 with 95 passing yards, while also running for 59 yards on 12 carries.

Mercer faced fourth-and-goal from the two-yard line when junior Bryson Yeast powered his way into the end zone to give the Titans a 6-0 lead after a failed extra point with two minutes to go in the first quarter.

Justin Russell for John Hardin went 16 for 32 passing for 182 yards and three interceptions.

The first interception came following Mercer’s first scoring drive. Junior Malachi Yulee jumped in front of the ball and picked off Russell’s pass, but quickly fumbled. Fortunately, junior defensive back Dillon Warren was there to pick up the ball and set Mercer up with a first and 10 on the John Hardin 37-yard line.

Warren caught a 10 yard pass for a first down on the following play to set Mercer up at the 27 yard line.

After a couple of Drakeford keepers, freshman running back Brayden Dunn ran for a two yard touchdown to give Mercer a 12-0 lead. The Titans went for two, but weren’t able to convert.

The Bulldogs were threatening to score on their following possession, but enter junior linebacker Jamason Sherrow. He picked off a Russell pass in the end zone, holding Mercer’s lead at 12-0 heading into the locker room.

The beginning of the second half started out great for the Titans. Yeast ran for a 72-yard touchdown on the first play to give Mercer a 19-0 lead after McClain’s extra point.

John Hardin started in great field position on the following possession, at the Mercer 37-yard line.

Russell led his squad within 10 yards of the end zone and eventually kept it for a nine-yard touchdown run. They went for two, failed and the score was 19-6 midway through the third quarter.

The next possession for Mercer was a tough one for Yulee. He fumbled on first down for a loss of one yard, and on the following play, fumbled again. John Hardin’s Will Cason was able to recover the second fumble and set up with great field position at the Mercer 35-yard line.

Russell led his team into the red zone again before throwing a four yard touchdown pass to Deshawn Johnson. The Bulldogs missed the extra point and were trailing by one score in the third quarter.

Drakeford did an exceptional job on the hard count at the line of scrimmage. He was able to force four encroachment penalties on the Bulldogs.

After Drakeford, Dunn and Yeast were able to take Mercer into John Hardin territory, Yeast was stopped on fourth and short and the Bulldogs took over on their own 23-yard line.

The Titans had one last quarter to stop the John Hardin comeback.

Mercer was able to stop the Bulldogs on fourth down on the following possession, but gave the ball back on Drakeford’s first and only interception of the ball game.

John Hardin had a little over two minutes to advance 62 yards for the score.

Russell drove his team to the Mercer 34-yard line before finding Scott on a slant for a 34-yard touchdown, that brought the game to 19-18.

After electing not to tie the game and potentially head into overtime, John Hardin Head Coach Chris Engstrand made the gutsy decision to go for the two-point conversion and the win. It turned out to be the right decision, as Josh Garret ran it in for two points to give the Bulldogs a 20-19 lead with 1:12 left to play.

Mercer started at their own 31-yard line. After a five-yard run by Drakeford, he found Dillon Warren downfield on third down to set the Titans up at the John Hardin 37-yard line with 26 seconds to play. Drakeford forced his last encroachment penalty, which gave the Titans five more yards.

On the following play, senior wide receiver Jon Jon Logue made a huge  21-yard reception at the 11-yard line with 18 seconds to play. McClain came out on the field for a game-winning field goal from 25 yards out, but came up short.

Buchanan talked about the positives, but said his team needs to get better in every aspect of the game heading into next week’s tough match up.

“I thought there were a lot of positives. There are a lot of positives we can build on, there’s no doubt about that,” said Buchanan. “But the lapses really got us. We’re going to have to play a much cleaner game to win. Overall, everything has to get better. In spots, I think we can eventually do everything we need to do, it’s just all got to get cleaner and better.”

The Titans will be back on the field on Saturday, Aug. 25, when they take on the Louisville-Waggener Wildcats, in the Rebel Bowl.

Kick off is at 5 p.m. at Boyle County High School. 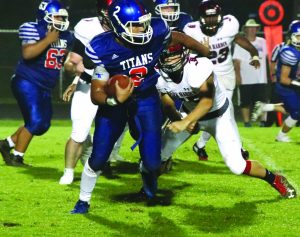 Junior Bryson Yeast (with ball) evades the tackle of John Hardin’s Trevor Nelson on a run in the second half of Mercer County’s 20-19 loss to the Bulldogs on Saturday, Aug. 18, at the Little Caesar’s Ft. Harrod Bowl. Yeast had a game-high 121 yards on 15 carries, along with two touchdowns, including a 72-yard run. (Photo by Arpan Dixit) 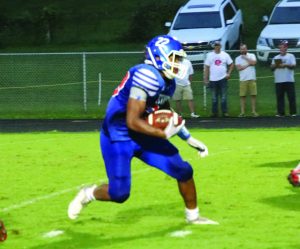 Junior Malachi Yulee runs in between the tackles against John Hardin in the Little Caesar’s Ft. Harrod Bowl on Saturday, Aug. 18. (Photo by Arpan Dixit) 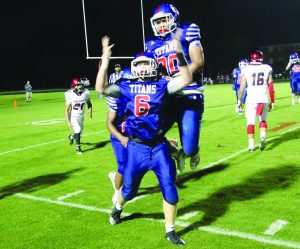 Senior Jamason Sherrow (6) celebrates an interception against John Hardin while junior Darrian Baker (30) celebrates with him. (Photo by Arpan Dixit)