Works Will Wait 10 Years For Second Shot at Parole 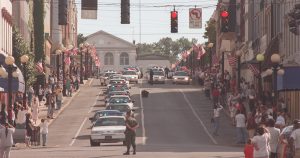 John Paul Works will have to wait another 10 years for his next chance to get out of prison. The state has denied parole to Works, who was convicted nearly 20 years ago of killing Regina “Jeanie” Nickles, the first female officer to ever serve with the Harrodsburg Police Department and the second officer to fall in the line of duty. Despite an apology from Works, the nine-member board voted not to release him.

“He didn’t convince me he was truly sorry,” said Mercer Sheriff Ernie Kelty, who testified. Kelty and Nickles served in the HPD together.

Kelty felt that Works had done little to show he had tried to rehabilitate himself over the past two decades—taking only one anger management class this year. Works didn’t even get a haircut before the hearing. The sheriff said he thought Works was still the same angry man who shot Nickles 20 years ago.

Kelty said Works, who’d had several run-ins with local police before the shooting, was waiting in ambush that day and would have killed anyone who approached him.

“Regina is a hero,” Kelty said.

That sentiment was echoed by Harrodsburg Police Chief Brian Allen. Allen never served with Nickles, but he was trained to be a police officer by Kelty and the other cops who served with her.

“I’ve not spent a day at HPD where her presence is not felt,” Allen said. “The HPD remembers Regina every day, not just her sacrifice, but how she performed her job. She left an indelible impression.”

Works will wait 10 years for his next chance at parole. Both Allen and Kelty praise the parole board for their decision.

“They clearly sent a message that we will hold you accountable,” Kelty said.

Christina Crace. Nickles’ oldest daughter, said the family is grateful Works was denied parole, but have mixed emotions. Crace said the hearing has forced her to relive her mother’s killing all over again. They were hoping Works would spend the rest of his life in prison.

“We don’t want to go through this again,” Crace said.

The family is grateful for the outpouring of support from the community, especially the hundreds of letters sent to the family and to the parole board on her mother’s behalf. She was also thankful to Allen and Kelty for their help.

“We are overwhelmed,” Crace said.

Learn even more in this week’s issue of the Harrodsburg Herald.