A total team effort propelled the Mercer County Lady Titans (1-0) soccer team to their first district win of the season against the East Jessamine Lady Jaguars (0-0) on Wednesday, Aug. 15.

It was a 9-4 contest, which saw goals nine goals  between both teams in the first half.

The Lady Titans played the end of the first half and the rest of the match with 10 players. Freshman Suly Smith committed a foul that earned a red card and was sent off with just about 15 minutes left in the first half.

“This is the first time with me being here with the girls and this coaching staff that we’ve started off winning our first two games, so that’s big for us,” said Head Coach Josh Culver. “They have come a long way since summer, constantly working together and getting the younger ones in sync. It’s starting to click. We started off with a little adversity today, losing a player on a red card, but we were able to make adjustments and they were still able to score two more goals in the second half while only giving up two.”

Sophomore Bella Garrett had herself a day. She scored three goals, scoring two in the first half and her final one in the second half to earn the hat trick.

East Jessamine got out to a quick start. They scored their first goal in the opening minutes of the game. Elsie Kibler scored on a cross to put East ahead 1-0 after two minutes of game time.

That lead didn’t last long for East thanks to freshman Maddie Angel, scoring inside the box to tie the game early.

Senior Lyzzi Prigmore scored Mercer’s second goal of the match off a Garrett shot that went off the post. It was quickly 2-1 Mercer County after 10 minutes of action.

Freshman Marlie Charles checked into the game midway through the first half, and quickly made her prescence felt. She scored a goal on a stunning kick that gave the Lady Titans a 3-1 lead.

Two minutes later, Angel added her second goal of the match on a nice kick from outside the box to make it 4-1 with almost 17 minutes left to play in the first half. Angel was all over the field against East, tacking on two assists to go with her two goals.

Junior Abby Steele got in on the act, scoring a goal on a breakaway and Garrett added her second just before the first half whistle to take a 7-2 lead into halftime. East added a late goal on a penalty kick by Katie Turner.

The Lady Titans highest goal total from 2017 was four goals. They scored seven in one half in an important district game.

Turner scored the first goal of the second half inside the box to make it 7-3 Lady Titans.

Steele scored her second goal of the match just minutes later to give Mercer an 8-3 cushion.

Garrett earned her hat trick on a nice breakaway goal for Mercer’s ninth and final goal, adding to the onslaught.

Ashlyn McHolan gave East their last goal  with three minutes to play before Mercer County came away with the win.

Freshman goalkeeper Chase Flach had three saves for the match.

“I’m definitely proud of the goals. Our shot percentage was up today and that was good to see. There wasn’t as much possession as we would have liked, but when you have to make adjustments like that, you have to change your game plan,” said Culver. “We were sometimes being lackadaisical. Just little things we do in practice all the time and they know it. It’s just keeping them focused and in that mind set. To be able to hold East to two goals and score two ourselves a man down, was a big win for us.”

The Lady Titans will be back on the pitch Saturday, Aug. 25, when they travel to take on Western Hills at 1:30 p.m. 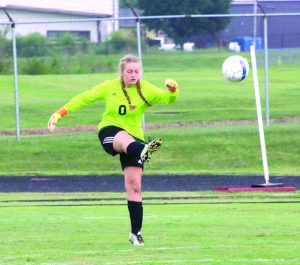 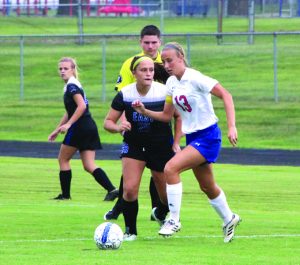