The Lady Titans have played four matches this season, and three of them have gone more than three sets, including a tough loss to Boyle County in four sets on Monday, Aug. 21.

“We just lost a hard fought game, plain and simple. Each game we started out flat and had to work our way back from being down,” said Head Coach Lynn Flach. “Tamara Bartleson hustled really hard and played excellent defense for us tonight.”

The Lady Rebels took control in the first set and never looked back.

The next three sets were a different story. The final three had a total of 176 points.

The second set saw the Lady Titans trailing early, but strong service games from freshman Haven Six led to a 14-all tie after the they trailed by six points.

Late in the set, junior Brinkley Prewitt’s serve won three straight points to put the score at 23-21 in favor of Mercer County. Unfortunately for the Lady Titans, the Lady Rebels won the next five out of six points to win the set (26-24) on the serve of Jaelin Hunter.

Flach’s team also trailed in the third set, but this time they came out on top. Boyle County led 16-9 and looked like they were going to run away with it, but Mercer County tied it at 17 led by the serve of Six.

Prewitt served out the set on the last two points to claim the third set for the Lady Titans, 26-24.

The fourth set, like the three before them, was just at exciting for both the players and the fans in attendance.

Boyle County won the match and the final set 26-24, but they had to earn every point.

Devine led Mercer County is kills with 11, Six was the top server with six aces and both were tied for the team lead in assists with 10 each.

The Lady Titans will be back on the court Thursday, Aug. 30, when they travel to East Jessamine for their first district game of the season. 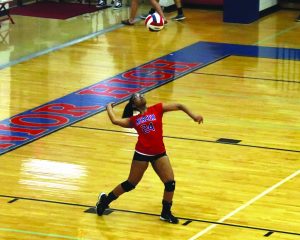 Senior Tamara Bartleson serve’s it up against Boyle County on Monday, Aug. 21. (Photo by Arpan Dixit)