The Burgin Lady Bulldogs (0-1) volleyball team played their first home game of the 2018 season on Thursday, Aug. 16, but it unfortunately ended in a straight set loss to the Danville Christian Lady Warriors (0-2) by a final score of 25-11, 25-6.

Burgin suffered their second loss of the young season, while Danville Christian picked up their first ever win as a member of the KHSAA, making the move at the beginning of the 2018-2019 academic year.

“We really focused on trying to make good first passes, good sets and good hits,” said Stewart. “We are much better at that since our last game, but we made a lot of errors tonight. Instead of focusing on that one error, we got to keep everything running full speed.”

Stewart knows this is a long process to get on the right track and he gave his team some words of encouragement after the match.

“I told them that I was still happy with the outcome because we are much better at the game since our first match. As long as we continue to get better, that’s the goal,” said Stewart. “We just want to keep progressing game by game. Eventually, we want to take the next step.”

Having a young team will cause growing pains. A team primarily made up of underclassmen, Stewart was encouraged by how some of these girls picked the game up.

Burgin will be back in action on Thursday, Aug. 23, when host McCreary Central at 7 p.m. 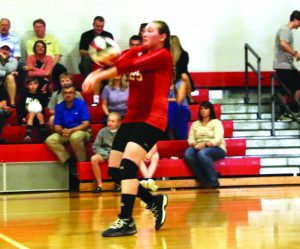 Hannah Stewart sets up for a dig against Danville Christian on Thursday, Aug. 16. (Photo by Arpan Dixit)