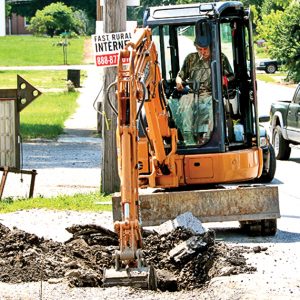 Contractor Curtis Wilmott digs up a broken watermain in July. Burgin officials are urging citizens to sign up for REACH Alerts and receive emergency notifications and boil water advisories.

Burgin city officials are asking residents to sign up for REACH Alerts after a water main break left some citizens without water. The water main running under the railroad tracks broke on July 26.

“A lot of people weren’t aware of it,” said Burgin City Councilwoman Katrina Sexton at last week’s council meeting. “They were using water that may have needed to be boiled and they didn’t know it.”

Mayor George Hensley, who also oversees the city’s water department, said he and his staff had tried to notify everyone they could, including sending out a REACH Alert, which notifies citizens about boil water advisories and other alerts. However, even though the service is free to Burgin residents, many have still not signed up. Hensley said city employees do everything they can to notify the public, but it’s hard to reach everyone.

Burgin residents can sign up for free automatic notifications at www.reachalert.com.

At last month’s council meeting, Councilman Sindicat “Sid” Dunn was challenged to produce the receipts of what he spent at last year’s Fall Festival. However, Dunn was unable to provide anything that would satisfy Councilman David R. Peavler.

“Why are you trying to bash me?” asked Dunn, who repeatedly denied charges of misappropriating a $250 donation made by the Mercer County Sanitation District towards the fall festival. Dunn said the event lost money, and he made up the shortfall out of his own pocket.

“I’m trying to hold you to the same standards that you’re holding us to,” Peavler said. “Get me $250 in receipts.”

Peavler was upset because at a previous meeting, he had been asked about a meal the city had paid for while Peavler was traveling on city business.

“I brought it up because it was city money,” said Councilwoman Sexton, who has made it her mission to have the city report its spending more accurately. “If we’re not going to abide by the laws, what are they for?”

In the end, Peavler reimbursed the city for the $26 meal while Dunn promised to reimburse the city the $250. City Clerk Michelle Russell reminded Dunn the check was to be made out to the Kendyl and Friends Foundation, who were supposed to receive any funds raised by the fall festival.

“Speaking of the fall festival, is anyone going to do one this year?” asked Dunn.

The councilman then volunteered to organize this year’s fall festival, which will be held Friday, Oct. 26, at Burgin Independent School.

Burgin Still Has No Auditor But Hires An Attorney

Representatives from two auditing firms appeared at the council meeting, but the city took no action. Mayor Hensley said the representatives would be invited to a working meeting with the city council soon.

“We’re kind of up against the wall and time is running out,” Hensley said.

Burgin has not had an auditor since Craig Butler of Kerbaugh, Rodes and Butler resigned in June. The city has not completed an audit since 2011 and a check of the Department of Local Government website shows there is $100,271.95 in state road aid Burgin has not been able to collect because of the missing audits.

“There is a possibility we may not want to attempt it,” Jones said.

But the council did, after months of deliberations, hire Wanda McClure Dry as the city attorney. Dry, who has served as interim city attorney since the retirement of Tom Hensley, was the only bidder for the position