The Mercer County Titans boys soccer team opened up their season on Tuesday, Aug. 14, by defeating the Anderson County Bearcats 6-3 in a physical game.

Head Coach Doug McClain picked up his first win as Mercer County head coach and was thrilled the Titans came away with the victory.

“It was too exciting for the fact that we let them stay in the game too long,” said McClain. “I thought we played well offensively, we just couldn’t finish shots at one point in the first half.”

Mercer county won the game 6-3, but they had a chance to almost put up 10 goals on the Bearcats if not for better execution. Seniors Marcus Lewis missed two shots in the box in clear space, ones that he normally puts away. Senior Luke Dean missed a header in the box that wasn’t heavily contested, but the Titans never gave in and were eventually able to score six goals.

It didn’t take long for the Titans to get on the board. Senior Andrew Turpin scored on a cross from Lewis in the opening seconds of the game to give Mercer a 1-0 lead. Anderson County was able to score six minutes later to tie the game at one. The Bearcats took a 2-1 lead in the 19th minute off a very long free kick.

Sophomore James Johnston led Lewis with a beautiful through ball with eight minutes left in the first half to tie the game at two. Junior Nate Randall scored off a Jamie Bordeaux assist right before halftime to give the Titans a 3-2 at the break.

Both teams had to be separated multiple times throughout the game by the official after some physical play.

Alex Sutherland evened the game at three with 30 minutes to play. Sophomore Jamie Bordeaux scored the go-ahead goal with 20 minutes left to give Mercer the lead and the win. The Titans tacked on two goals late in the game. The fifth goal for the Titans came on an own goal by the Bearcats, while Lewis scored his second goal of the match with just under five minutes to play.

Despite winning the game, McClain wants to see his team finish more often and build attacks in the midfield instead of going early.

“Obviously we need to finish a little better. We need to put the ball in the back of the net when given the opportunity,” said McClain. “We also need to build more on our attack in the middle of the field as opposed to going too early and giving the ball away.”

The Titans will be back on the field today, Thursday, Aug. 16, when they host the Franklin County Flyers at 7:30 p.m., at the Mercer soccer complex. 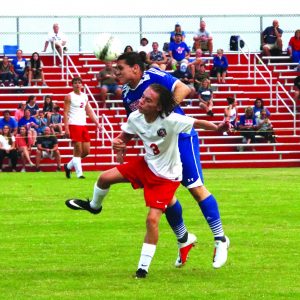 Senior Jacob Cruz heads the ball while batting for position with Anderson County’s Trenton Watson in Mercer’s 6-3 victory over the Bearcats on Tuesday, Aug. 14. (Photo by Arpan Dixit)