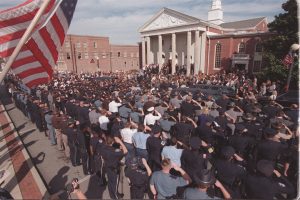 On Oct. 17, l998, police from across Kentucky stood in salute as the casket of Harrodsburg Police Officer Regina “Jeanie” Nickles was taken to Spring Hill Cemetery. Image courtesy of the Lexington Herald-Leader.

Family Asks For Public Support To Keep Works In Prison

The family of Regina “Jeanie” Nickles are waiting to find out if her killer could be released next week.

A two-part parole hearing was held this week for John Paul Works, who was convicted 20 years ago of killing Nickles, a veteran officer with the Harrodsburg Police Department. On Monday, the board heard victim impact statements from Nickles’ family and friends. On Tuesday, they heard from Works. The nine-member board will announce their decision on Monday, Aug. 20.

According to the Lexington Herald-Leader, Works apologized for shooting Nickles. “I am truly, deeply remorseful for what I’ve done,” Works is quoted as saying.

Christina Crace, Nickles’ oldest daughter, attended both days of the hearing. She said the family was not moved by what she called Works’ “sorry attempt” at an apology, nor do they feel his efforts at reforming himself while in prison are genuine. She said Works has taken only one anger management class during his two decades of imprisonment.

“He’s never taken any classes until this year for any kind of recovery at all,” she said.

Crace said Works had reached out to the family once in the last 20 years and had never made any attempt to contact either her or her sister, Brandellin Nickles.

“He’s never, one time, ever reached out to Brandy or me,” said Crace, who was still overwhelmed with the events since the parole board announced they would give Works a hearing.

She said the parole board had three options: to give Works a life sentence, to deny his parole for another 10 years or to release him. Crace said the family wants Works to spend the rest of his life in prison.

“I honestly think that the best place for him is in jail,” she said. Crace also said she fears for her family’s safety if Works is released.

Asked if she thinks her mother’s killer might finally be released, she said, “I have no idea.”

Crace said the family appreciates the outpouring of support from Mercer County. She said there is still time for the public to make their voices heard before the parole board makes their decision.

Public comments can be sent to: