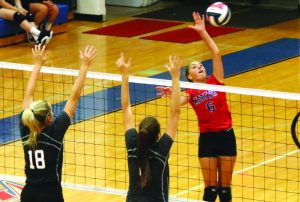 “Pulaski has a good team so it’s not a disgrace to get beat by them, but it was not okay knowing that we have the ability to play with them, and didn’t,” said Head Coach Lynn Flach. “I chalked the first set up to nerves. The second set, we came back, played well and played with them. The third set, we made a lot of mistakes. Pulaski didn’t do anything to beat us, we kept making mistakes and took ourselves out of the game. We’ve got to be able to fix it mentally.”

It was a struggle for Mercer County in the first set, only scoring seven total points.

Like Flach talked about, the Lady Titans battled back and made it a really entertaining second set. The Lady Maroons had a 17-13 lead, but Mercer quickly came back to take the lead 21-20. Pulaski was able to weather the storm and hold on for a 25-22 win after junior Jaclyn Devine’s missed block attempt.

Flach was encouraged with the second set. She said if the Lady Titans are capable of playing with that intensity each set of every match, they will be a dangerous team.

“We’re really a young team overall. I’ve thrown something completely knew at them offensively and it’s just going to take playing time against good teams for us to get better and master what we need to do to start getting on top,” said Flach.

The Lady Titans struggled in the third set, making costly errors that Pulaski was able to take advantage of, on their way to a 25-9 win in the final set.

“I wish she would’ve started playing in middle school, because she has so much potential and ability,” said Flach. “She’s already come a long way in the month that we’ve been practicing. Throughout the season, we’re going to see more out of her.”

Mercer County will be back on the court today, Thursday, Aug. 16, when they travel to Casey County to take on the Lady Rebels in their first away match. 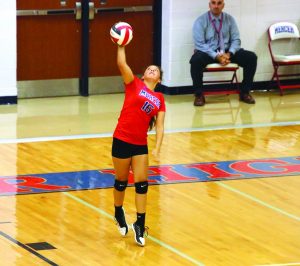 Freshman Salena Cox serves it up in Mercer’s home opener against Pulaski County on Thursday, Aug. 9. (Photo by Arpan Dixit) 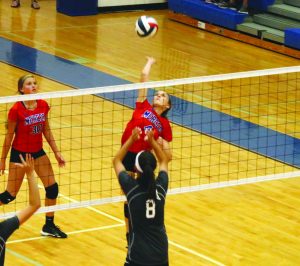