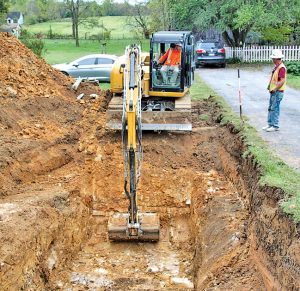 Workers with Todd Johnson contracting digging a hole in a 2017 file photo. The Mercer County Sanitation District has hired an outside inspector to go over Todd Johnson’s work.

The Mercer County Sanitation District has hired a company to perform a closed circuit TV inspection of all sewer lines installed by Todd Johnson Contracting Inc. of Danville. The contractor has become the most notorious of the three firms hired to build Burgin’s sewer system, with residents and city officials complaining about poorly repaired streets, damaged yards and badly laid sewer lines.

The district’s board of directors made the move last week after reviewing footage of lines installed under Mulberry Street and Kentucky Route 152 which showed gaps between pipe segments as well as sagging areas where sewage gathered. The defects were found in areas where Johnson had previously made repairs.

The contractor has said the line would pass a test for leaks in which air would be pumped through the pipes, but Mike Sanford, executive director of the Sanitation District, disagrees.

“I don’t care if it passes the test,” Sanford said. “It might not ever leak, but it wasn’t properly laid.”

It is likely that Highway 152 will need to be closed in order for the further repairs to the sewer lines to be performed, he said.

Johnson won the $3.5 million contract to build a 25,000-foot gravity sewer main on South Main Street, which is nearly two thirds of the entire sewer project. What they saw on just one 2,000 foot section has given the District board of directors pause.

“There’s no telling what’s out there,” said the Sanitation District’s attorney, Larry Catlett.

Johnson is currently suing for breach of contract, charging the District with not providing accurate documentation before construction began, which ultimately caused the contractor to run over schedule and over budget.

The District is arguing that Johnson started work 70 days late and did not perform proper due diligence before the project began.

Catlett said it would likely take years for the lawsuit to wind its way through the court system but that the warranty period ends in November.

“We’ve got to protect ourselves,” said the attorney, who called the work Johnson did while employed by the district a “ticking time bomb.”

“There’s no telling what he’s done to us, what corners he’s cut,” he said.

Catlett called the inspection, which will cost $22,500, “insurance.”

“If it doesn’t turn up a single thing—Hallelujah! We’ll have to eat it,” he told the board. “If it turns up anything else, that will be added to the lawsuit.”