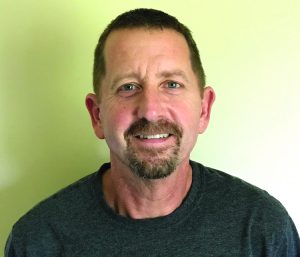 Mayes has over 20 years of coaching experience, and has been the head assistant coach for Asbury women’s basketball the last two years.

“I am still shocked honestly. It’s something I’ve always wanted to do, in leading my own program, but never sought out,” said Mayes. “I’ve always been content working for Greg Edwards and those couple of years with Chris Souder, but any coach always wonders what he, or she, could do out on their own. I guess we will see now.”

Mayes had many people he wanted to thank for this opportunity.

“I just want to thank the people of Harrodsburg and Mercer County for their support. I’ve had so many people reach out and congratulate me. This is home for my family and I. It always has been, and always will be,” said Mayes. “I would never have had this opportunity if Greg (Edwards) had never taken a chance on me over 20 years ago and kept me through all his stops in coaching. I’m sure Greg and Chris (Souder) would both say, just like I will, it’s the young men and women who go out there and play because they love the game of basketball that make us look good and gives us a lot of accolades and chances. To all of the former players that I’ve ever had any small role in coaching, thank you from the bottom of my heart for helping me get this chance.”

Mayes has had multiple coaching stops over the years. It all bgan when he played at Harrodsburg High School in the mid 1980s.

“Greg (Edwards) was hired as the junior varsity coach my senior year and I also played with one of my close friends in Chris (Souder),” he said. “Little did I know that the stage was being set for a future in coaching.”

In 1994, Edwards asked Mayes if he would be interested in coaching.

Mayes said he never even thought about it until that moment, but he jumped at the opportunity. He went on to  win mutliple district championships, a regional runner-up, a Class A regional title and a regional championship in 1996 during his coaching days for the Pioneers.

“I will have to say that in all of that success, my greatest moments, without a doubt, were the relationships I built with the young men I was fortunate to coach. Those friendships last to this day,” said Mayes.

After his stint at Harrodsburg, Mayes joined the Mercer County boys basketball staff as an assistant coach in 2000, winning a regional title that season.

“I never thought I would ever do that, being a Harrodsburg person to the core, but I took the opportunity and was fortunate enough to be blessed with a great team my first year at Mercer County Senior High School as an assistant,” he said. “It was at this time that Souder was coaching the girl’s team at Mercer and asked me to come over and help him.”

Mayes spent the next two seasons with Souder and learned a lot from him.

“We had two great years of success and I learned a tremendous amount watching him and Greg. I truly have tried to pattern so much of what I do after those two. I couldn’t have two better friends and two of the best coaches this area has ever seen,” said Mayes.

After his stint at Mercer, and before stopping at Asbury, Mayes was an assistant coach for the Boyle County High School girls basketball team for eight years under Edwards and was able to coach two years in Puerto Rico.

“Of course the two years at Asbury helped me on the way to becoming a head coach, but the years in Puerto Rico were an incredible opportunity for me. It opened me up to different techniques that I’ve never used, or to be honest, never even thought of,” said Mayes. “Truly, I’ve been blessed to learn so much from the coaches I’ve been around.”

Mayes talked about the support of his family, especially his wife, Chandi.

“It’s simple. I couldn’t, or wouldn’t do this without the support of my family. My wife, Chandi, is the strongest women I know. She holds down the fort while I’m out with practice, games and recruiting. Without her, I would be lost,” he said. “My kids love it as well. My oldest son, Jake, actually married a former player from Asbury, Ellen Grey.”

Mayes said Grey currently holds many records at Asbury for three-point shooting and left as the all-time leading three-point scorer in school history.

Mayes is involved in something bigger than coaching and the sport of basketball in general. He frequently visits Puerto Rico for mission trips. Mayes and his wife founded the LYNC8 Project, a nonprofit organization that works in the United States and Latin America with college students and young adults.

“Last week, I was in Puerto Rico with the Asbury men’s soccer team leading a mission trip. They are providing clinics and working in the communities damaged by Hurricane Maria. They are a great group of young men.”

“I have the best, I hate to even say ‘job’, but, job in the world. Chandi and I have been working in full-time missions for the last five years and now it’s worked out that my role at Asbury is the full-time women’s basketball coach,” said Mayes. “But in addition to that, is to coordinate missions for our athletic department. God has truly blessed me way more than I deserve and Chandi and I thank him daily for this.”

Mayes has also served as an officer for the Kentucky State Police and the Harrodsburg and Lexington Metro police departments.

He is excited to get the season started and has enjoyed his new role so far.

“I’ve enjoyed being around fellow coaches of the different sports in the athletic department and my boss, Mr. Whitworth. It is such a great environment to be in,” he said. “I go to bed each night looking forward to waking up and going in and seeing what’s in store for the day. Of course, the team is fantastic, but I’ve only seen them in pieces since taking over. I’m certainly looking forward to this upcoming basketball season.”