Justin Jenkins Played Banjo For Grascals This Past Weekend 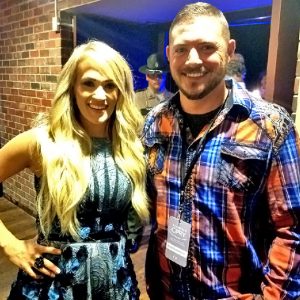 Carrie Underwood posed for a picture with Justin Jenkins during his gig at the Grand Ole Opry this past weekend.

The Grascals are an award winning bluegrass band most famous for their tour with Dolly Parton in 2011.

Their regular banjo player couldn’t make the performance and they called Jenkins to fill in.

Jenkins started playing the banjo when he was 8 years old after he watched a gospel band play at Shawnee Run Baptist Church with his Grandfather.

The act inspired Jenkins to want to play the banjo and his Grandfather who was friends with the band arranged for lessons.

He played local events during his youth, like the Mercer County Fair until 1998 when he landed a spot on WKYT’s afternoon show which led to a regular gig at Mt. Vernon’s Renfro Valley Entertainment center.

“It’s really wild, I never thought I would have a career as a musician,” said Jenkins. “It just all fell into place.”

Jenkins spent his high school weekends playing the Renfro Valley Barn dance and moved to traveling bands when he was 19.

This isn’t his first trip to the Opry. “I played there once before when I was 18,” said Jenkins. “I landed a guest spot.”

“It doesn’t matter how many times you play on that stage, because of it’s caliber and that everyone who is anyone in country music has been there, you realize it is a blessing,” said Jenkins.

Carrie Underwood was a headliner act at the Opry when Jenkins played.

“The only reason I got to meet her was because I was a musician too,” said Jenkins. “Fans weren’t allowed backstage.”

Carrie Underwood is a leading female country artist who won season 4 of American Idol and has continued to produce award winning records since 2005.

“She was a really nice, down to earth Christian girl,” said Jenkins. “It was a cool experience.”

Today, Jenkins plays with the band ‘Allan Bibey’s Grasstowne’ who just released their single “Gonna Rise and Shine.” That single is currently number one on the bluegrass gospel charts.

“That is the cool thing about music, it has let me experience traveling through Europe and places all over,” said Jenkins. It is a blessing that I get to experience it.”

For more information about the band, visit grasstowne.com