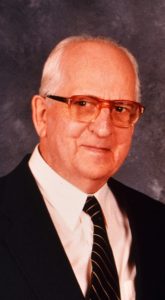 Born April 28, 1915, in Mercer County, he was the son of the late William Stanley and Margaret Keightley Harmon.

After returning home from the army following WWII, Bill was employed as a bookkeeper and later by Corning Incorporated for twenty-six years. He was a member of the Harrodsburg Baptist Church and a former member of the VFW and the American Legion. Throughout his life, gardening and Ky Basketball provided him with much enjoyment. However, his deep, enduring love was for his beloved wife and family.