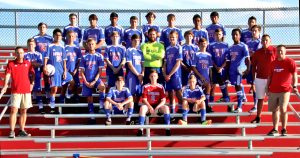 The Mercer County Titans boys soccer team is coming off another regional championship, their third in a row, and fifth in school history.

New Head Coach Doug McClain takes over a program that lost their all-time leading scorer in Brandon Ballard, one of their best defenders in Austin Bartley and a leader in the mid field, Trey Releford.

“Austin (Bartley) was a leader in the back, Trey (Releford) was in the middle and of course, Brandon (Ballard) was up front,” said McClain. “We’re trying to find those leaders all over the field that we lost. We’re going through some growing pains right now, trying to get these seniors to step into those roles.”

Cruz was the goalie last season, and Johnston took over the spot late in the year during postseason play, but McClain is make a few changes this year. He plans on playing Cruz on the field because of his skill set and Johnston in the back line.

“Aiden West and Chris Day, two sophomores will be fighting for the starting goalie spot. We will take it game-by-game and see how they do under pressure or until one of them steps up.”

McClain said both West and Day have improved each practice. Assitant Coach Aaron Steele was a former goalie and will help the guys in that area.

“They are both growing, gaining confidence and getting their fundamentals down,” said McClain. “They are also learning to lead from the goal, which is obviously a very important position on the field.”

Other underclassmen that saw a lot of time last year were junior Hunter Booth along with sophomores James Johnston, Jamie Bordeaux and Jeron Winchester.

Booth was a center piece in the mid field and was vital to Mercer’s success as a team in 2017. Johnston started all year in the back line and will continue to man that area. He is quick, strong and able to get the ball out of danger when needed. Bordeaux is a versatile player who can play up top and in the midfield along with Winchestor, who experiences some success last season helping Ballard up top.

McClain said that Ontiveros and Turpin have really taken the leadership role seriously this season.

“All of our seniors lead by example, but Angelo (Ontiveros) and Andrew (Turpin). Turpin is a quiet leader and I call Angelo the old wise man,” said McClain. “When he talks, people listen. Both the guys are laid back, calm and very coachable. It’s great to have those kinds of kids on your team.”

The Johnston brothers, Raskin, Cruz and Beaven will be fighting for spots in the outside back positions.

Replacing Ballard is a tough task, as mentioned, but McClain knows he has some guys that can pose a threat this season. Senior Marcus Lewis, who is one of the fastest players on the team, will use his skill set to get in front of defenses and score goals.

“Marcus is hopefully going to step into that role as long as he can stay healthy. Turp is also going to play up top some along with Bordeaux and Winchester.