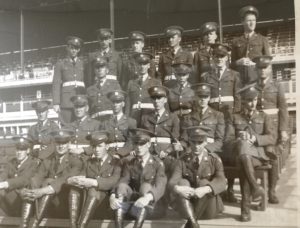 The 66 members of the 38th Tank company of the Kentucky National Guard were called on active duty in 1941 and participated in the infamous Bataan Death March. Only 37 men survived.

The Harrodsburg chapter of the Veterans of Foreign Wars, better known as the VFW, is  teaming  up with the Kentucky Army National Guard to stage a ruck run to commemorate the Harrodsburg Tankers on Nov. 10.

The Harrodsburg Tankers, officially known as Company D, 192 Light Tank Battalion were deployed to the Philippines November 1941, as before the U.S. formally entered WWII.

In April of 1942, they were forced to surrender and participate in the infamous ‘Bataan Death March’.

Only 37 of the original 66 tankers survived.

Bataan Park on North College Street has a memorial tank dedicated the Harrodsburg Tankers and the ruck run and fundraiser to support beautification of the park, the VFW activities and bring the community together for Veteran’s Day.

The VFW is a non-profit organization that supports veterans through a variety of programs. The national effort of the VFW lobbies for healthcare, retirement, transitions, education and much more. The local chapter participates in the national effort but provides a club of friendship, comradery and a pot- luck meal the third Thursday of every month.

“We want all the veterans to know they are not forgotten,” said Jim Stinnett, quartermaster for the Harrodsburg VFW. “We do community outreach, we want to take care of those who have served in the past.”

Some of the VFW activities include putting flags on the graves of veterans who have passed in Mercer County.

“We purchase the flags and the volunteers help us put them out every year,” said Stinnett. “We also sponsor essay contests at the schools every year.”

Currently the Harrodsburg VFW has about 100 members and any veteran with combat experience is eligible to join.

The veteran’s day events will be held Nov. 10 with sign ups available as early as August.

The VFW and the National Guard will have a booth at the Oktoberfest on Main Street held October 12-14.

Coins featuring the Harrodsburg Tankers are available for purchase at the Harrodsburg Police Department through Jo Pike or call Mike Brown, post commander of the VFW at 859-612-9462 for more information on the VFW and how to support them.