Many Users Of Opioids Switching To Other Drugs 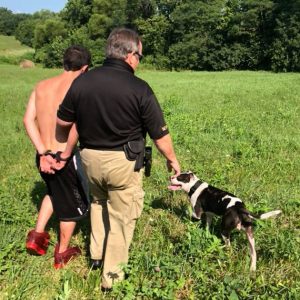 Dep. Bill Cruce takes a suspect into custody. While it’s almost impossible to determine if the use of meth is increasing, the number of meth-related overdoses have grown by over 50 percent.

State and federal officials are lauding a decrease in prescriptions for opioid painkillers. However, many users are transitioning from opiates to  other drugs, including methamphetamine.

On one day last week, three people were arrested for dealing in meth as a result of two different investigations.

Tips about possible narcotics trafficking led deputies with the Mercer County Sheriff’s Office to the Stoner Street residence of Daisy G. Bradshaw, 47, of Harrodsburg. Evidence collected at the scene led to the arrests of Bradshaw and Roy Miller, 39, also of Harrodsburg. They were both charged with 1st-degree possession of methamphetamine. Bradshaw was also charged with possession of drug paraphernalia.

Investigators busted Jeffery Cole Carmickle, 20,  while cleaning out a homeless camp behind the housing authority.

Carmickle, who had an outstanding warrant against him, attempted to flee on foot, but was apprehended by deputies who were working with the Harrodsburg Police Department as well as housing authority maintenance staff. Carmickle was arrested and charged with 2nd-degree fleeing/evading police—on foot, 2nd-degree escape—identify facility, 1st-degree possession of methamphetamine, 1st-degree promoting contraband and possession of drug paraphernalia. All three are being held at Boyle County Detention Center. Dep. Bill Cruce and Capt. Scott Elder of the Mercer County Sheriff’s Office made the arrests. 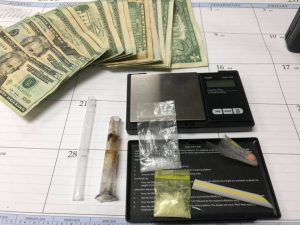 Some of the evidence seized during a drug bust last week include cash, drugs and scales. Image courtesy of the Mercer County Sheriff’s Office.

County officials say many people addicted to either opiates such as heroin or opioid painkillers have begun to transition to meth, used alone or in combination with other drugs. For some users, it’s not necessarily about chasing a more powerful high. Officials say some users are switching to meth because they believe it’s easier to kick than heroin.

However, meth is a dangerous drug. According to the 2017 Overdose Fatality Report compiled by the Kentucky Office Of Drug Control Policy, overdose fatalities increased statewide in 2017. A review of cases autopsied by the Kentucky Medical Examiner found that approximately 22-percent of overdose deaths involved the use of heroin in 2017, down from 34-percent in 2016. Meanwhile, methamphetamine was involved in 29-percent of deaths, a 57-percent increase over 2016.

Whether it’s heroin or meth, Mercer County residents want them off the streets. But there has been some good news lately. The Mercer County Grand Jury indicted five people as a result of a MCSO investigation from 2017.

Capt. Elder said there may possibly be another round of indictments connected to the investigation later this month.

“It took a lot of hard work,” Elder said.

The evidence was procured by off duty deputies working undercover. While it may seem like a long time—the drug buys were made in 2017, while the indictments were not handed down until 2018—Elder said it can take that long for the state drug lab to complete testing.

“As far as an investigation goes, it’s not that long of a time,” he said. “It’s typical of undercover drug buys.”

The chief deputy also said there were “strategic reasons” the arrests were not made until this year, but declined to give further details about an ongoing investigation.