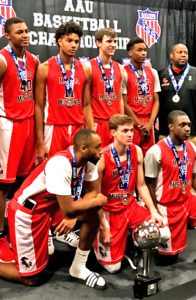 Carter Baughman poses with his fellow AAU Mustangs. Baughman is prepared to use what he learned on the travel circuit to get the Titans to the championship this year.

The AAU circuit grows more popular year-by-year. It is a chance for some of the best hoopers in the country to showcase their skills in front of big time college coaches and play with and against the elite.

One local Mercer County Titan got a big opportunity to do that this summer.

Senior Carter Baughman, who has been the starting point guard for the Titans the last two seasons, is entering his last year of high school eligibility and showcased his skills for the M.A.T.T.S. Mustangs for the last couple of months.

He played in some huge tournaments, putting in work every day, and his team finished national runner-up at the AAU Nationals, going up against some elite competition. Listed below are the tournaments Baughman got a chance to compete in with his team:

“It has been a great experience to play against some of the top players in  the country,” said Baughman. “It has given me an opportunity to work on my weaknesses and improve my skill set.”

Baughman also had a chance to play with recent University of Kentucky commit, Dontaie Allen, and said it helped him a lot.

“Playing with Dontaie helped me learn different ways to control the game. Seeing him adapt to the defense that was thrown at him every game, helped me realize that you can affect the game in different ways,” he said. “I think this will translate into my decision-making this high school season.”

Baughman’s AAU coach, Steve Quattrochi, coached him in middle school and the last two seasons with the Mustangs. Quatrrochi sees a lot of potential in Baughman’s game.

“I remember telling Carter if he wanted to play at the college level, he was going to have to work on his game like it’s a job. Clock in at the gym every day and put the work in to improve,” said Quattrochi. “His ball handling was good when he was younger, and now it’s even better. His defense has really improved and he has a knack for getting steals and deflections.”

Quattrochi said Baughman’s offensive game has been a huge threat to opposing defenses.

“He shoots in the 40-percent and higher range, and if he’s open, you can count the bucket and start going the other way when it leaves his hand.”

“Carter played very well this summer. He handled the ball well with minimal turnovers and knocked down open shots. He helped us win a lot of games and opened college coaches’ eyes over the course of July,” he said.

Baughman said he has improved every aspect of the game this summer, but mainly his toughness.

“I have tried to improve my offensive skill set in my all-around game, especially playing more physically,” he said. “I think my ability to read the floor and control the offense against bigger and stronger players these past few months really stood out to me.”

Baughman also got the chance to play in front of some of the best college coaches in the nation.

“It was cool to look over and see coaches like John Calipari (Kentucky), Tom Izzo (Michigan State), Coach K (Duke), Bob Huggins(West Virginia) and others watching us play,” he said. “That made our games much more fun and interesting.”

Although getting to play in big tournaments and playing in front of  and against elite company, the relationships you build during this time are ones you’ll remember forever. Not every high school player gets the chance to play on the AAU circuit. Baughman knows this, and he cherished getting an opportunity of a lifetime.

“The relationships that I made with those guys on the team were really awesome. We all became really close with each other, which was really cool,” said Baughman. “We also got to travel to some really cool places like Las Vegas, Myrtle Beach, Orlando and Atlanta.”

The kid’s got game, and he will be looking to get the Mercer County Titans over the hump and back to the state tournament in his final season as a Titan.

The Titans are coming off a heartbreaking 27-6 season. losing to Southwestern on a buzzer-beater in the 12th Region finals.

Baughman tries to block that out, but it is something that always goes through his head.

“I try not to think about it too much outside the gym, but I think it is something that always goes through my head,” he said. “But, I think my teammates and I need to remember it this coming season to motivate us to get to where we want to go.”

Baughman talked about his maturity year-by-year.

“The past two years being the starting point guard have really helped me mature as a player. I put in countless hours in the gym, which helps me realize that I am prepared for this,” said Baughman. “I feel comfortable motivating my teammates so that we can be a successful program.”

His high school head coach, Josh Hamlin, was a point guard himself when he played.

“The biggest thing for me is getting stronger, but I will continue to stay in the gym and work on my game,” he said. “My teammates and I need to continue to work hard and stay engaged, learning from our coaches every day.

Baughman got his first taste of the recruiting process during his junior season heading into the summer and playing with the Mustangs. He has one offer from Brescia University, but is drawing increased interest from coaches at different levels and divisions.

Baughman’s mother, Pam, couldn’t be more proud of her son and was grateful for the opportunity he was given.

“Carter has worked extremely hard for years on his high school team and AAU/travel teams. It was nice of him to end his AAU career on a high note with incredible teammates. We are grateful to all of the coaches who have nurtured him along the way,” she said.