The Kentucky State Police has joined a six state   project to enforce the ‘Move Over’ law through Saturday, Aug 4.

The move over law says  vehicles must move over or slow down when an emergency vehicle is pulled over on the side of the road. It is designed to make the roads safe for people who work in law enforcement, emergency services and public safety.

Failure to comply can result in fines, jail time or both says the state police.

A Mercer County Sheriff’s deputy was injured while conducting a traffic stop on US 127 in March of this year.

“Our own Deputy Steven Peyton was inches away from being run over by a semi when his vehicle was struck,” said Sheriff Ernie Kelty. “Anytime it is safe to do so we would appreciate it if you move over.”

Kelty said Dep. Peyton was lucky to escape his incident without serious harm but many other emergency staff do not.

“We are out there for the purpose of keeping the public safe,” said Kelty. “If it is at all, possible move over to help us stay safe.”

“We are partnering with other state police agencies targeting ‘Move Over’ law violations,” said Master Trooper Billy Gregory, a spokeman for Kentucky State Police. “Our goal is to reduce the number of senseless tragedies that occur because a motorist did not provide the necessary and required room for law enforcement and emergency service personnel while they work alongside our roadways.”

The Kentucky Transportation Cabinet is supporting the enforcement effort by using digital message boards over interstates across the Commonwealth, to display ‘Move Over’ messaging.

For more information on the law and its consequences visit the Link to KRS 189.930: http://www.lrc.ky.gov/statutes/statute.asp 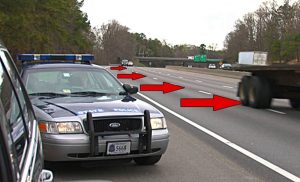