Campbellsville University officials are warning Mercer County residents that lines at local grocery stores might get a little longer at the end of the month.

The university hopes to finish their first residence hall to house 80 students at the Conover Education Center in August.

In what are trying times for education, Campbellsville is continuing to boldly pursue expansion, both here in Harrodsburg and across the university. In 2009, Campbellsville officials set an enrollment goal of 5,000 students by 2025. They reached that goal last year, when the student population reached 5,035, a 47-percent increase over the year before. Most of that growth has been in the graduate programs, which has seen a 135-percent increase.

Carter said the university needs to move beyond their initial focus on the adult market, which he called “cyclical.”

Even with the closing of Eastern Kentucky University’s satellite campus in Danville, the adult market will soon be saturated. In order to make the Harrodsburg campus sustainable, Campbellsville has to reach first time students, Carter said.

“We can’t survive and thrive relying only on the adult market,” he said.

That’s why the university chose to erect the dormitory and are looking to add two more over the next two years. It’s all part of providing a traditional college experience which will attract high school seniors.

Another step the university is taking to make the campus more attractive to prospective applicants is expanding the athletic offerings in Harrodsburg. In addition to the men’s basketball team, they will also offer a women’s basketball team and bowling team this year. Next year, they intend to offer soccer, track and field and women’s volleyball, providing they can get the facilities built in time. Carter said the university is looking to add two to four programs a year.

The construction is part of a 10–15 year build out. Carter said the ultimate goal is to grow beyond the Harrodsburg campus and connect all the property the university owns within the city.

“There is a method to the madness,” he said.

But there is more to Campbellsville’s plan than adding buildings. Carter said the university also plans to add staff. Conover Center already has around 40 full-time employees as well as another 20 adjunct faculty members. The university plans to hire another 20-25 employees to handle the additional students, he said.

The university plans to offer over 30 programs at Conover Center. That’s made possible with Campbellsville’s local partnerships. For example, by working with Ephraim McDowell Health, students enrolled in Conover Center’s nursing program will not need to leave Harrodsburg to pursue their studies. The university plans to add a licensed practical nurse program next year.

Campbellsville also has partnerships with Mercer Transformation—who provide tutoring for over 30 elementary students to get  them reading at the appropriate grade level—as well as Mercer County Adult Education, the American Cancer Society and the Willows of Harrodsburg. Not only will the retirement community send employees over to the Conover Center for job training, university athletes will hold a game night at the Willows once a month.

“This is the most comprehensive education center Campbellsville University has ever had,” Carter said.

It’s been over 100 years since Beaumont College closed and over 150 years since Bacon College left Harrodsburg to become the University of Kentucky. In the years since, Mercer County residents have looked at the growth of other communities with colleges such as Danville and Centre College with more than a little envy. In the USA, higher learning leads to higher economic growth over all. Conover Center allows Mercer to finally compete.

It’s also good for local students, said Amy Matthews. Matthews currently serves as director of the Conover Education Center, but before joining the university, she worked with Mercer County Adult Education. Matthews said she wanted to find a way for adult students to continue their education without leaving Mercer County.

She approached several Kentucky colleges, some of whom were willing to offer classes but all of them said no when she asked if they would actually open a school in Harrodsburg.

“We were looking for a university to say yes,” Matthews said.

She finally found one when she approached Campbellsville. The university has invested over $5 million in construction in Mercer County. They are borrowing $1.5 million to build their dorm.

Carter admitted that Campbellsville’s gamble might not pay off. Some of the programs do not earn money, but other programs—like the cosmetology program, which drew 97 applicants this year—earn enough to fund the others.

“We pay close attention to student debt and institutional debt,” said Carter, who said Campbellsville has never closed an educational center in the university’s history.

On Friday, Aug. 10, athletes will move into the new dorm. They will shortly be followed by students from  Mississippi, Chicago, Miami and from as far away as the Turks and Caicos Islands, a British territory in the Atlantic Ocean.

On Tuesday, Aug. 14, starting at 1:30 p.m., Conover Center will hold a media day to show off their new building. The public is invited. 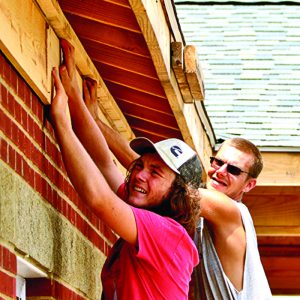 Employees of Hilpp Construction work on the new dorm at Campbellsville University’s Conover Education Center in Harrodsburg. Student-athletes will start moving into the dorm on Aug. 10 if all goes according to plan. (Photo by Robert Moore)