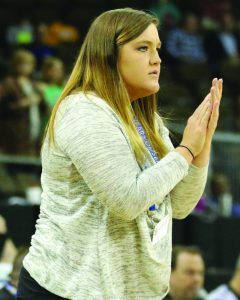 A new era for the back-to-back KHSAA Girl’s Sweet 16 state champions is underway.

“We were looking for someone to maintain the program of excellence. That was really my number one priority. We wanted to get the girls to buy in to the same expectations that we’ve always had here for this program,” said Smith. “We’ve had 19 wonderful chapters with Coach Souder, and now we can start a new chapter with Coach Spivey. No one knows what’s going to happen, but I believe that if we do what we’re supposed to do, then we will have an exciting 20th chapter.”

Smith said hiring someone with  a strong relationship with the girls was one of the key factors in his job search.

“She thought about the job before she even applied. I told her that I don’t see much of a drop-off from coaches. I wanted someone who will help the girls continue their academic excellence as well. Sometimes you think you have to go out there and get this and that, and it’s right there under your nose,” he said. “I told her that she has to remember, she’s Coach Spivey, not Coach Souder. But you’re always going to be compared to him and that’s just what it is.”

Smith said his conversations with Spivey during the interview process went really well and they had some very good discussions.

“There is something about commitment and consistency. She’s been in the program for a long time and that weighs heavily. I was looking for head coaching experience at first, but I realized even though she hasn’t done it from a head coaching position, she went through the whole process as a head assistant. Ultimately, I said wow, she’s coached all of these girls as they have worked their way up from the middle school ranks. One of the things that jumped out for me is that she embraced the expectations here. She knows, she’s played in it, she’s coached in it and now it’s her time.”

Spivey, 28, is a Mercer County native, and has been a part of the program for 13 years, both as a player and coach.

“It’s exciting but at the same time, it’s a little overwhelming. But I’m really excited for the opportunity,” said Spivey. “I’ve told people before, I’ve played for this program and coached the past six years here. I’ve always wanted to be a head coach, so I’m just really excited that it happened here in Mercer County.”

Spivey graduated from Mercer County in 2008, played basketball at Asbury University out of high school for two years, and eventually graduated from Eastern Kentucky University with a Bachelor of Arts in Political Science. Spivey is currently a social studies teacher at MCSHS.

Spivey said she met with Smith multiple times and all the meetings up to her hiring were very positive.

“When I interviewed, one of my main points was there really wouldn’t be a big adjustment for the girls. They know me, I know them and I’ve coached them since they were in middle school,” she said. “So for me, that was kind of a big selling point. I’ve been here, they’ve been with me and we have trust in each other. Talking with Donald Wayne, we talked about scenarios, different circumstances and he actually gave me a little bit of time to think on the job. I was thankful for that because it gave me time to gather my thoughts. He (Smith) has kind of been a mentor to me through the whole thing and he just said it had been a long process, but at the end of the day, he felt like with my experiences and knowing the girls that it was a good fit for me.”

Spivey said since accepting the job, she has talked to Smith everyday about different things and said he has been very helpful in that aspect.

Souder, who recently accepted a job as an assistant at Indiana State University, was another mentor that Spivey mentioned, having been around Souder for over a decade.

“I don’t feel like there was anybody I could’ve learned from any better, as a player and as a coach. I’m going to put my own spin on things and things will be a little different, but I felt like he left me a really good foundation,” said Spivey. “Over the years, he’s given me more and more responsibility and when I came back from college and decided I wanted to coach, we sat down for a meeting and he asked me if I wanted to be a head coach, and I said yes and he said that we were going to prepare you for that. I’ve coached in every level of this program, which I think is a really good thing. It gives me a dynamic that I know what it’s like to be a middle school coach, I know what it’s like to be a freshman and junior varsity coach and I know what it’s like to be the head assistant. That kind of gives me a perspective on what I am looking for in those positions and what type of people I can get here to benefit our program. That has really prepared me for this job.”

Spivey said playing for Souder and coaching with Souder was a little different.

“I saw him more of a colleague rather than a coach that was above me. He was really good about making us feel a part of it and having us do different things behind the scenes, but he’s still the same Souder,” Spivey said with a smile. “We joke about it now, but when I played for him, we butted heads bad, but I used to always joke with him and told him I’d come back and coach with him and he didn’t believe me. But I eventually did, and he told me when he hired me that I don’t want someone that’s going to agree with me on everything. I knew his coaching style, but then I also felt like I could bring a different perspective to things as a former player. It was just really neat to get both sides of him as a coach.”

Spivey called Souder the morning before she accepted the job.

“I wanted to pick his brain and talk to him and he gave me some good advice. I haven’t talked to him as much since I actually took the job, but I’ve texted him a few questions here and there and he’s been very helpful. He’s just been a great mentor and a leader in my life and I know that he’ll always be there.”

Spivey started coaching at Mercer when the five seniors who recently graduated were on their way up through the varsity ranks. Seygan Robins, Emmy Souder, Emma Davis, Faith Lake and Lexy Lake played for Spivey in seventh grade so she grew up with them as a coach.

“They were actually my first team that I ever coached. Obviously then, I could realize that they were the above average team, but I had no idea that they would eventually be as good as they were. It’s just been a really good experience because having five seniors from one graduating class go on to play college basketball doesn’t happen very often, if at all,” she said. “I felt blessed that I had the opportunity to coach them since they were in middle school and see them develop. That’s what I really learned the most from, is that starting with them as 12 and 13-year-olds up to being 18, and see the growth there and see what we were working towards and see it come to fruition. I feel like I was immersed in that process so I know what it takes to develop players like that and to get to where we were, which I think will help me in this next phase.”

Spivey said she has always received a tremendous amount of support from her family and that didn’t change when she got the head coaching job.

“They’ve been really excited about it. I’ve always had a lot of support from my family. They might actually be more excited about it than I am,” she said. “They’re just thrilled because they know this is what I’ve been working for and so just to see me finally get the opportunity to do it was a great moment for them.”

Like most coaches or players, basketball is something that comes at a very early age, but not for Spivey. She started playing basketball in sixth grade.

She wanted to be a coach when she came back from college.

“I had always said it in high school that I thought it would be something that I would enjoy. My original plan was to go to law school. I got accepted and I just needed a break from school.” she said. “I said I was going to take a year and be a substitute teacher and coach. I just fell in love with it and decided to not go to law school and go this route. It wasn’t actually my plan, I thought it would just be something I did for a year or two, but I just fell in love with it.”

Despite losing most of their scoring and leadership, the Lady Titans are still expected to challenge for a 12th region title and get back to state. Senior Toni McCombs and junior Channing Lewis will be the top returning scorers and Spivey knows they are both capable of leading this team, along with a lot of experienced underclassmen.

“I don’t think people realize the talent and experience we have coming back. It might not seem like that because we had such a senior dominated team, but I’ve coached these girls since middle school, and I know what we have coming back. For me, our goals don’t really change. I still fully expect to compete for a region championship. To me, that’s non-negotiable and I think we are capable of doing it. Experiencing those changing roles and developing players that are going to show leadership and take control of the team are some of the little goals that I have.”

Spivey is ready to get the season going to try to defend a region and state title. 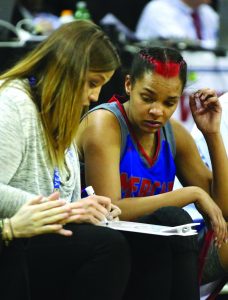 Hayley Spivey coaching one of the top returning scorers for next season, Channing Lewis, at last year’s state tournament. (Photo by Pam Merchant)