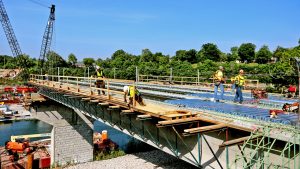 Walsh Construction employees work on pier 3 of the replacement span, which runs parallel to the old bridge.

The contractors building the replacement for the Kennedy Mill Bridge say weather has them a month behind schedule.

Local businesses, lake residents and visitors have been closely following the project, especially since the old bridge was shut down several months ago. Many were hoping the replacement would be finished ahead of the November 2019 completion date.

But, even working 16 hour days six days a week, the weather has played havoc with the construction schedule, said Kevin J. Buch, P.E., the project manager with Walsh Construction Company, the principal contractor. Walsh still intends to be finished before the deadline, Buch said.

“We’re hoping to beat that, but that’s still our contractual date,” he said.

Rain on June 27 forced Walsh to close pier one, which sits on the Mercer County side. Since then they’ve focused on span three on the Garrard County side. Last week, they brought in the girders for span three, which were so huge they had to close the road. As big as they are, they are not the biggest components needed to build the bridge, Buch said. The big girders will not be delivered until September, he said.

However, it’s key that span three, which will be the main entry way, be reopened. Buch said they plan to start work on the pier again this week, weather permitting. They must pump out the water and clean out the tub before pouring concrete, Buch said.

“We haven’t had any damage, only schedule impacts,” he said. “We don’t know how dirty it is yet.” 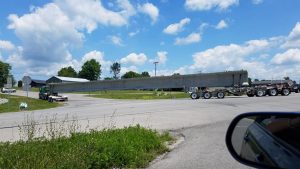 A delivery truck brings one of four girders to Herrington Lake. Contractors say the really big girders will not be delivered until this fall. Picture credit: Amanda Hoh.

Last week, Walsh began demolition of the old bridge, using a crane to haul away the roadway. Buch said they plan to begin pulling out the bridge trusses sometime this week, but it will take some time to complete that operation.

While few will be sad to see the old bridge go, it was a genuine piece of state history. Generations of Kentuckians have nervously crossed the span, which was declared functionally obsolete decades ago. It’s tempting to watch the old bridge be taken apart, but Walsh is warning the curious to keep their distance.

“It is completely unacceptable and extremely dangerous to be out here now that demolition has begun,” Buch said.

Contractors have been bedeviled by the weather this year. Walsh asked Kentucky Utilities to temporarily drop the water level on Herrington Lake down below summer pool—720 feet—in order to install the footing at pier two. The lake got so low that many local marinas had to shut down their boat docks. But the situation changed quickly, thanks to the mercurial weather patterns. 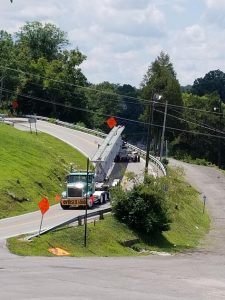 A girder is delivered. It will be used on pier three, which sits on the Garrard County side of the Kennedy Mill Bridge. Picture credit: Scott Gerkins.

“The low water time frame was originally scheduled for early winter when the impact to the public would be minimal, but due to multiple weather events, it was pushed into late spring,” Buch said. “We were very concerned a drought would ensue and the water would not come back up for the season.”

Now the builders have high water to contend with.   On Friday, Buch took the Harrodsburg Herald on a tour of the site. “The water’s still high but it’s coming down,” he said. “If it would stay like this for a while, we’d get some work done.”

There is a ray of light among the storm clouds. Walsh is negotiating with the state to accelerate construction, Buch said. But until the two parties come to an agreement, the contractors are sticking with their original completion date.