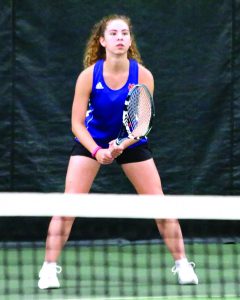 Trent has been competing around the state and the southeast part the country this summer at multiple tennis tournaments. She won the singles 16 and under division at a tournament in Bowling Green, and later that day won the 18 and under doubles tournament with senior teammate Gracie Caton.

She has been working hard out of state as well, competing in Indiana, Georgia and winning a 16 and under tournament in Tennessee.

The Lady Titan tennis team is hoping to repeat as 12th region champions.

“Our main goal this season is to repeat as regional champions and for several players to make it to the state tournament.” This team is very close to each other,” said Caton. “I can always count on my teammates to be there rooting me on.”

The support and encouragement among this team are directly responsible for the success they have, and Trent knows they help her achieve her goals.

“During the season, they were always super supportive. I feel like part of the reason I was able to turn around my regional final match, after being so close to losing, was because of their support,” said Trent.

“Rebekah Trent is a fighter. She gives 110-percent every time she steps on the court,” Caton said of her teammate. “She’s an amazing tennis player and she puts a ton of time and effort into what she does,” said another one of Trent’s teammates, Meymey Ly.

“I would like to be able to win the regional tournament again, as an individual in singles but also as a team. I really would like to make it a couple rounds in the state tournament if I can,” said Trent when asked about her expectations for the upcoming season.

Head Coach Stephen Lyons witnesses daily the hard work that Trent puts in on the court. “She is a competitor, and she will go the extra mile to get things done,” said Lyons.