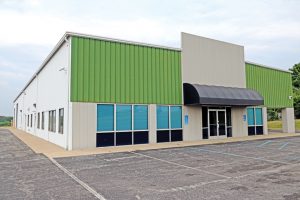 The City of Harrodsburg has agreed to purchase the former Caldwell Tank property on Louisville Road. Once the sale is finalized, officials hope to turn the building into a new headquarters for the police department as well as a substation for the fire department.

While the site will allow police to keep impounded cars onsite, the main reason for the move is to reduce response times, said Harrodsburg Police Chief Brian Allen. Allen made finding a new headquarters for the police department part of his five-year plan after being promoted to chief earlier this year.

“It will really cut our response time,” Allen said. “We’ll be closer to the bypass.”

Commissioner Scott Moseley said the move would shave up to two minutes off the time it takes first responders to answer a call.

While the fire department will only have a substation at the new site, Moseley said the city’s long term goal is to move the department from the firehouse on Broadway, which sits less than a block away from the railroad tracks.

Moseley said if there were a major rail disaster downtown, the fire department could be incapacitated.

Because Harrodsburg is basically split down the middle by the train, which travels through town nearly 30 times a day, both police and firefighters can be delayed in responding to calls, depending on where the emergency is, Moseley said.

Harrodsburg Dispatch, who handle 911 calls, will remain at the current headquarters.

The fire department will continue operating out of the Broadway firehouse for the foreseeable future, Moseley said.

That way, the city will have a fire company on either side of the train tracks, he said.

Moseley also said the city does not intend to leave the current firehouse empty without finding a new tenant first.

“There will be no buildings left vacant,” he said.

The city plans to renovate the new location, adding a day room and a training room for firefighters, as well as paint and install new signage, however, no date has been set.

The city commission voted unanimously to authorize Mayor Eddie Long to sign the agreement on Thursday. A $30,000 deposit will be placed in escrow for 30 days while the city performs inspections.

Moseley said he doesn’t know how long it will take the police department to relocate once the sale has been finalized. He said he hopes the police have set up shop at their new digs by the end of this year.

The next meeting of the Harrodsburg City Commission is Monday, July 23, at 7 p.m.

For more information, check out this week’s issue of the Harrodsburg Herald.