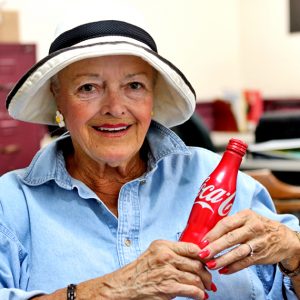 Jane Butterfield, Mercer County’s “Can Lady,” holds up the millionth can she’s collected since she started eight years ago. Even though she’d considered retiring after hitting the milestone, she’s reconsidered. “I don’t know what else to do,” Butterfield said.

Jane Butterfield, Mercer County’s “Can Lady,” just collected her millionth can and is still going strong.

“I don’t know what else to do,” Butterfield said.

She has been collecting aluminum cans and scrap metal to raise money for the Mercer County Animal Shelter since she moved to Mercer County eight years ago.

Even though she was considering not being the can lady once she’d collected her millionth can, she has since changed her mind.

“I feel so good when I go to the shelter and drop off the food,” she said.

Even suffering a broken ankle didn’t slow her down. Last year, she got hurt after slipping on a deck. But within a few weeks, she was out picking up cans again, wearing a surgical boot. Her regulars saved up their cans for her.

Butterfield has a lot of regulars. She works seven days a week, averaging 10-12 stops a day. Wednesday is her biggest day, when she makes up to 20 stops.

Other than her husband, who crushes the cans for her, it’s pretty much a one woman operation. On a normal week, Butterfield said she collects up to 3,000 cans. After the recent holiday, she took nearly 5,000 cans to the recycling center.

“For a town this size, that’s pretty amazing,” Butterfield said.

A self-described animal lover from California, Butterfield began collecting cans after she retired. In addition, she said she feeds over 200 squirrels, chipmunks and birds with scraps she also gathers.

She started because of her love of animals but she keeps at it because of “the people I’ve met and the friends I’ve made.”

She has a long list of people who save up their cans for her every week. She moved here not really knowing anyone and she created a community of her own. They may not know her name, exactly, but they all know her.

“People stop me and ask me how much the cans are going for,” she said. “They call me the can lady.”