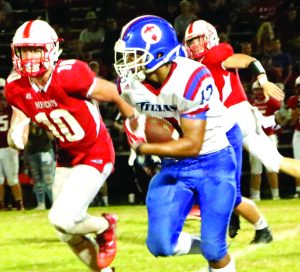 Bryce Yeast (13) is looking forward to football season in 2018, his junior year, and expects to have a big season. Yeast is coming off his first full offseason in Harrodsburg. (Photo by Arpan Dixit)

Junior Bryce Yeast made the move from Lexington to Harrodsburg last Spring. The move from a city of over 300,000 people to a county with less than 10,000 people is a big switch.

Transferring from Dunbar High School, a school with a graduating class twice as large as Mercer County High School, which has around 200 students, comes with many other changes.

Yeast plays running back and linebacker for the Titans, which was a big switch from his days at Dunbar where he played defensive back.

“At Dunbar, football was more laid back, but in Harrodsburg, they take it more seriously which was a big plus in moving here,” said Yeast.

Yeast plans are to play college football after high school so the switch to a school that takes its football program more serious is a move in the right direction.

Yeast wants to follow in the footsteps of his older brothers. Zay Yeast plays football at Eastern Kentucky University, while Markel Yeast plays at Hanover College. Yeast’s dad, Julius, committed to Ohio State out of Harrodsburg High School in 1998.

“Last season Bryce made us better because of his talent. This fall, his work in the weight room and on the practice field will take his game to another level,” said Mercer County head football coach David Buchanan.

Last season was one filled with distraction and confusion. Yeast had much less time than the other players to learn the system and to become comfortable with the program. He now has had an entire offseason to get stronger and fully learn the offensive and defensive schemes. He is planning to be the Titans primary play maker on both sides of the ball this upcoming season.

As well as football Yeast is also a Titan basketball player and plans to contribute much more to their success this upcoming season.

“Bryce, especially this summer, has turned into a leader for our team. Seeing Bryce get more comfortable over the months has been really cool to see. He is so much more comfortable and we can’t wait to see how good a year he has for the football team and then for us,” said Titans head basketball coach Josh Hamlin.

“The biggest challenge is meeting new people; having to leave everything behind and feeling like you’re starting over is tough,” said Yeast.

It is never easy being the new kid on the block but it sure helps to move across the street from three of your aunts.

Yeast says that his aunts have introduced him to the area and ultimately helped smooth the process over.

“They told me the do’s and don’ts here in Mercer; what to do here to fit in and make new friends,” said Yeast.

They have been the biggest help to Bryce on the road to excelling both academically and athletically.