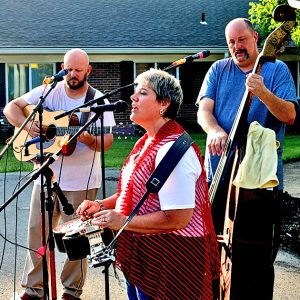 Adam Hopkins and Karen and Ric Maxfield, better known as the Royal Blue Bluegrass Band, will perform Friday, July 13, at the Beaumont Inn, starting at 5 p.m.

If you stop by the Beaumont Inn on Friday, July 13, at 5 p.m., to catch the Royal Blue Bluegrass Band, your eyes will not be fooling you. That is indeed former Harrodsburg Fire Chief Ric Maxfield playing on the doghouse bass.

Maxfield and his wife Karen, who plays the Dobro and sings lead, have been in the band for 16 years.

“We played for a long time, on and off,” Maxfield said. “It’s hard to believe.”

They started in 2002 with Karen’s parents, and at times they’ve had up to seven members. Over the years, they’ve played their mix of traditional bluegrass and Appalachian acoustic music on television and radio, and recorded CDs. But family and job commitments gradually took up more and more of their time.

“We got really busy,” Maxfield said.

He retired from the Harrodsburg Fire Department last year, so now he has time to play. Royal Blue is now a trio, along with guitarist/mandolin player Adam Hopkins. They’ve played at the Burgin Barn, but Maxfield said it’s tough to find local venues. As a result, the band travels to Richmond, Maysville and Louisville to perform.

“It’s hard to get to play around here,” he said. “There are just not a lot of openings.”

On July 3, the group warmed up the crowd for the fireworks show at Harrodsburg Health and Rehabilitation Center. Maxfield said they try to perform at hospitals and nursing homes as a way of giving back to the community.

“We have as much fun there as on a big stage,” he said.

In addition to playing at the Beaumont Inn this weekend, they will appear at Harrodsburg Harvest Coffee on Saturday, July 21, starting at 6 p.m.